During his two-week stay in Ladakh, His Holiness not only inaugurated Karma Dupgyud Choeling Monastery, but also visited several monasteries and sacred places of Ladakh. 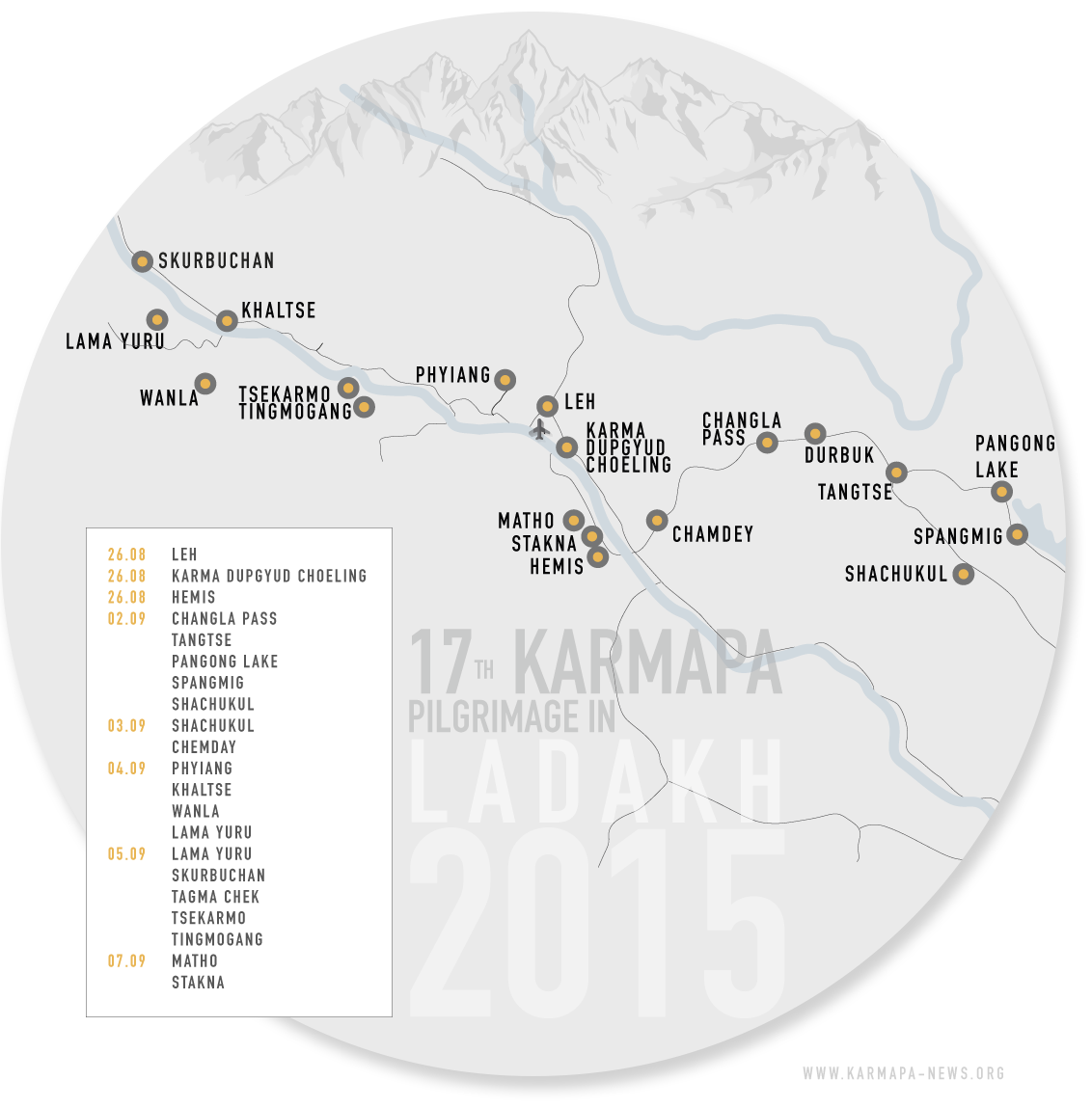 The first pilgrimage in Ladakh was to Hemis Jangchup Ling Monastery and Je-go Tsang cave on 30 August. Hemis was re-built in the 17th century and is one of the biggest monasteries in Ladakh, belonging to the Drukpa Kagyu School. After a welcome ceremony at the monastery, followed by a butter tea and rice offering, the entourage began a two-hour climb up to the cave. In the heat, but surrounded by beautiful mountains, everyone slowly walked up to the cave. The locals had prepared a beautiful, adorned horse for His Holiness, in order to make his trip easier. Howewer, Gyalwa Karmapa fed the horse an apple, but chose not to ride up the hill. After reaching the cave, His Holiness, with his closest entourage, conducted prayers in the cave. After a while, everyone was asked to leave, and Gyalwa Karmapa meditated only with Maniwa Sherab Gyaltsen Rinpoche for approximately one hour. In the end the monks joined again and conducted prayers of Calling the Lama from Afar, as well as swift rebirth prayers. After a short break everyone returned to Hemis Monastery for lunch. After lunch, Gyalwa Karmapa blessed the shrines of the monastery and visited Hemis Museum. 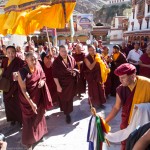 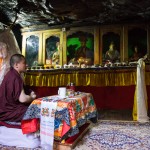 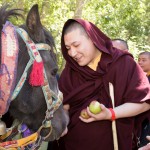 On the way to the cave

In the early morning of 2 September, Gyalwa Karmapa left for four days of pilgrimage, organized by Karma Dupgyud Choeling Monastery. On the first day, Gyalwa Karmapa, with 60 cars in his entourage, went on pilgrimage to Pangong lake. En route, the entourage stopped at Changla Pass, which is one of the highest road passes in the world, 5350 m above sea level. Gyalwa Karmapa blessed prayer flags, and devotees hung them around the pass. It is said that mantras printed on the flags are blown throughout the world by the wind. In the next valley, Gyalwa Karmapa was received by a Nomad family who owned a herd of yaks. Everyone enjoyed being around the animals and tasting home-made tsampa, cheese, and butter tea. Gyalwa Karmapa went into a tent of the Nomad family to bless their shrine and offer a khata. Further along the way, hundreds of locals greeted Gyalwa Karmapa by offering butter tea and auspicious rice. The entourage was received at Tangtse Monastery, belonging to the Drikung Kagyu school, for the Kyopa Jigten Gonpo blessing, followed by a short tea and rice offering. 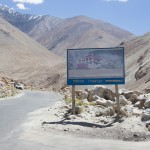 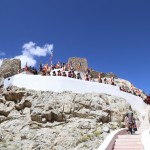 Way up to Tangtse Monastery 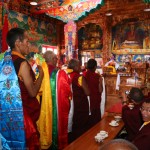 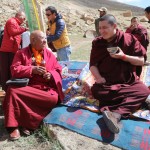 Tea break with a nomad family 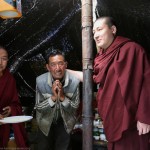 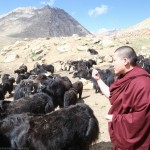 Finally, the entourage arrived at the beautiful Pangong Lake. His Holiness Gyalwa Karmapa gave the refuge vow to local devotees, followed by a teaching. After the welcome ceremony at the lake, everyone took a walk along the magnificent, azure-blue lake, to enjoy the site. Then the entourage continued along the lake, to stop at Spangmik Camping site where everyone had lunch organized by H.E. Choeje Togden Rinpoche. After lunch, Gyalwa Karmapa, together with Maniwa Sherab Gyaltsen Rinpoche, Togden Rinpoche, and the closest entourage walked to the lake to perform prayers and naga vase offerings. The majority of the group had a camp organized at the site of Pangong lake. Gyalwa Karmapa, with his closest entourage, proceeded to the final destination of the day, Shachukul Monastery, belonging to the Drikung Kagyu. Despite the late arrival, the hosts gave a warm welcome to Gyalwa Karmapa. 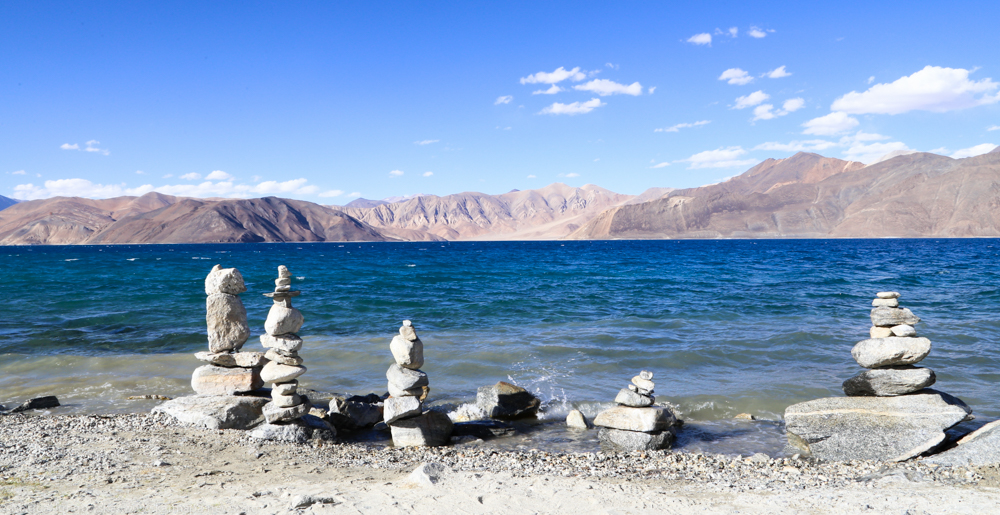 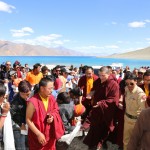 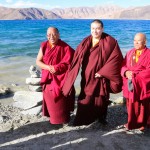 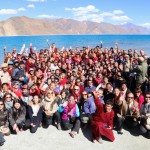 On the next morning, Gyalwa Karmapa visited a Government School, situated a few minutes from Shachukul Monastery, where approximately 300 students welcomed His Holiness with cultural performances. Gyalwa Karmapa gave a teaching about the meaning of education. Shortly after visiting the school, His Holiness came back to the monastery to bestow the Amitayus empowerment to over a thousand devotees gathered from surrounding villages and foreign guests who joined the pilgrimage. On the return to Leh, Gyalwa Karmapa visited Chemday Monastery, belonging to the Drukpa Kagyu School. 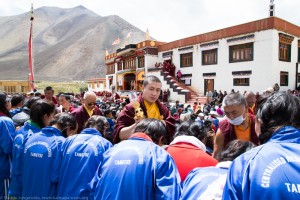 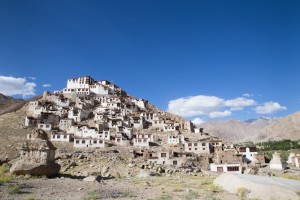 On 4 September a second pilgrimage began, with the final destination at Lama Yuru, which is one of the oldest monasteries in Ladakh, dating from the 11th century. It is said that Naropa came to this area and dried up the lake around to establish the monastery. On the way to Lama Yuru, Gyalwa Karmapa visited several Drikung Kagyu monasteries, where everyone was warmly received by locals as well as being offered butter tea and auspicious rice. The first stop was at Phiyang Monastery, remarkably situated on a hill, the main seat of His Eminence Choeje Togden Rinpoche. After ceremonies and breakfast, everyone continued the pilgrimage to Khaltse, surrounded by beautiful gardens, where Gyalwa Karmapa gave a teaching and blessed the shrines. After lunch, the entourage proceeded to Wanla Gompa where Gyalwa Karmapa blessed all of the shrines. After a tea and rice ceremony Gyalwa Karmapa once again gave teachings and blessing to local devotees. After dusk, everyone finally arrived at Lama Yuru. 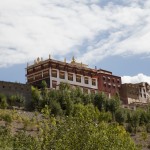 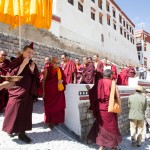 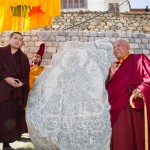 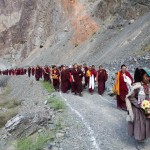 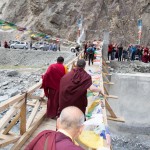 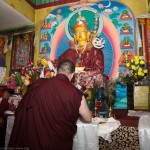 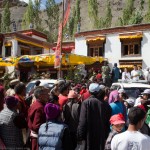 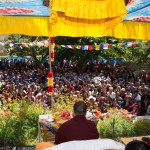 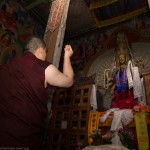 The following day began with the empowerment of Buddha Amitayus (one of the Buddha aspects of long life), bestowed by Gyalwa Karmapa at Lama Yuru. Gyalwa Karmapa was also invited to visit several other Drikung Kagyu monasteries: Skurbuchan, Tagma Chek, and Tsekar. Everywhere Lamas of the monasteries were offering mandalas, butter tea, and auspicious rice. Hundreds of local people gathered to receive blessings and the Chenresig lung from Gyalwa Karmapa. Later on, after nightfall, Gyalwa Karmapa visited Tingmogang Gompa, belonging to the Drukpa Kagyu school, which houses a self-arisen Avalokiteshvara and a very big Maitreya statue. 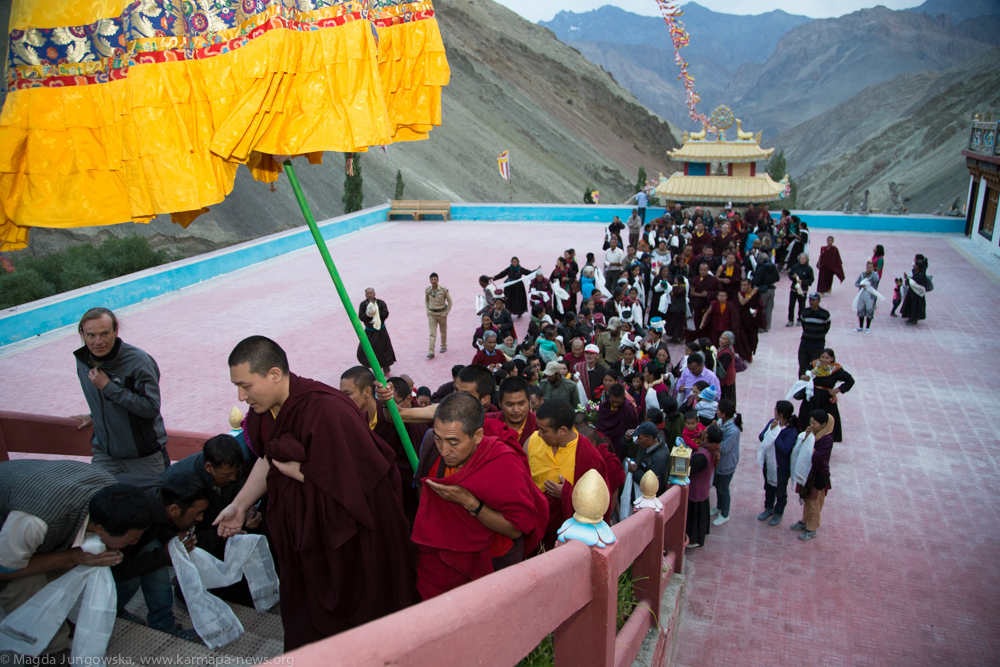 On 7 September Gyalwa Karmapa paid a visit to Matho Monastery, which belongs to the Sakya Lineage. Following the welcome ceremonies and blessing of all the shrines, the entourage traveled to the newly built Pothang of Matho Monastery. Gyalwa Karmapa blessed hundreds of local devotees, followed by lunch. After a break, the entourage visited Stakna (“Lion’s Nose”) Monastery, which was built in the 16th century and belongs to the Drukpa Kagyu. 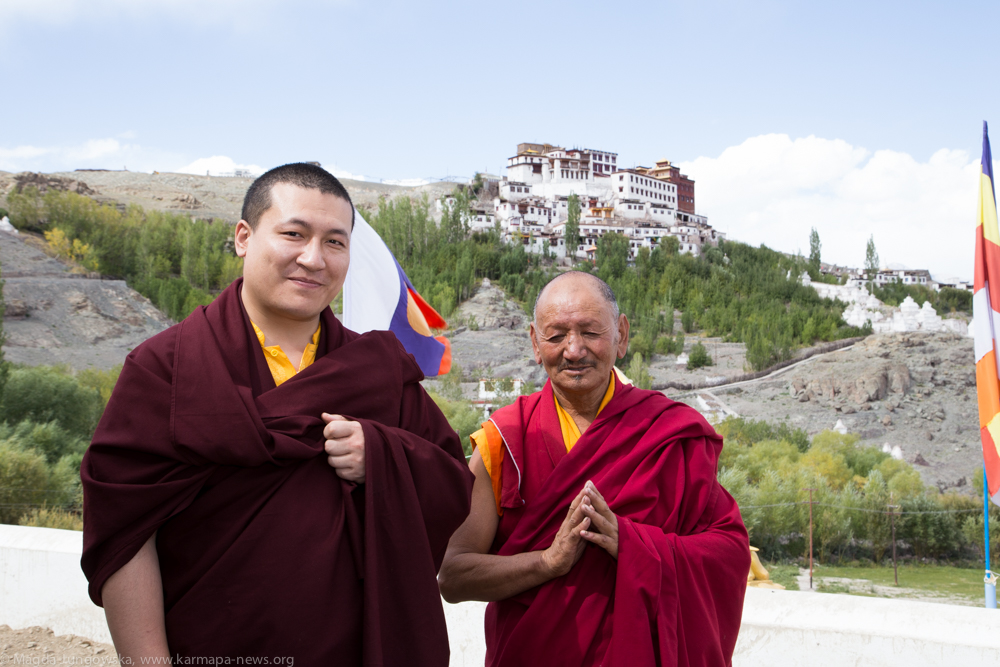 See all the galleries from pilgrimage in Ladakh: