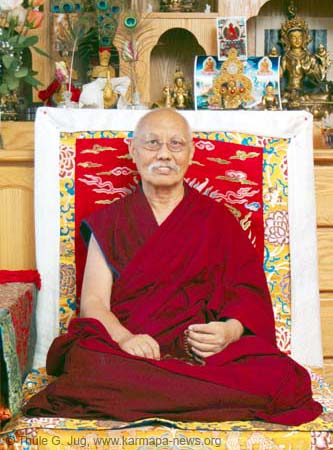 In 1954, Luding Khenchen Rinpoche became the spiritual head of the Ngor-lineage within the Sakya-school of Tibetan Buddhism. The Ngor-lineage with its original main seat in Tibet, the monastery Ngor Evam Chöden, was founded by the Sakya master Kunga Sangpo in the 14th century. Since then a major part of the instructions of the Sakya tradition has been transmitted through the Ngor-lineage.

After his escape from Tibet, Luding Khenchen Rinpoche saw to it that the teaching- and practise tradition of the Sakya school continued outside Tibet too. Ever since, he has been unceasingly active to transmit the Buddha’s teachings and in particular the instructions of the Sakya tradition. In each and every respect he is an authentic Vajra-master and one of the great teachers of Tibetan Buddhism.

In June and July 2003 Luding Khenchen Rinpoche transmitted to the 17th Gyalwa Karmapa, Trinley Thaye Dorje, a part of the “Gyude Kuentue” which is a large collection of the Buddhist Tantras.