His Holiness the 17th Karmapa in Ladakh

On 26 August 2015 Thaye Dorje, His Holiness the 17th Karmapa,  arrived at Leh Airport in Ladakh, surrounded by the majestic Himalayas, rising 3,500 metres above sea level. Gyalwa Karmapa was warmly welcomed by H.E. Choeje Togden Rinpoche, Ven. Chime Rinpoche, dignitaries from many monasteries of the Drikung Kagyu, Drukpa Kagyu, Sakya, Nyingma and Bonpo Schools, as well as by various sanghas and many local and foreign devotees. With more than 200 cars in convoy, Karmapa was warmly greeted by thousands of devotees from Ladakh all along the roads of Leh, on the way to Karma Dupgyud Choeling Monastery, where hundreds of monks and guests welcomed him with great joy. The welcome ceremony took place in the old shrine room (Lhakang). Ven. Chime Rinpoche, abbot of the monastery, offered a mandala to Gyalwa Karmapa. 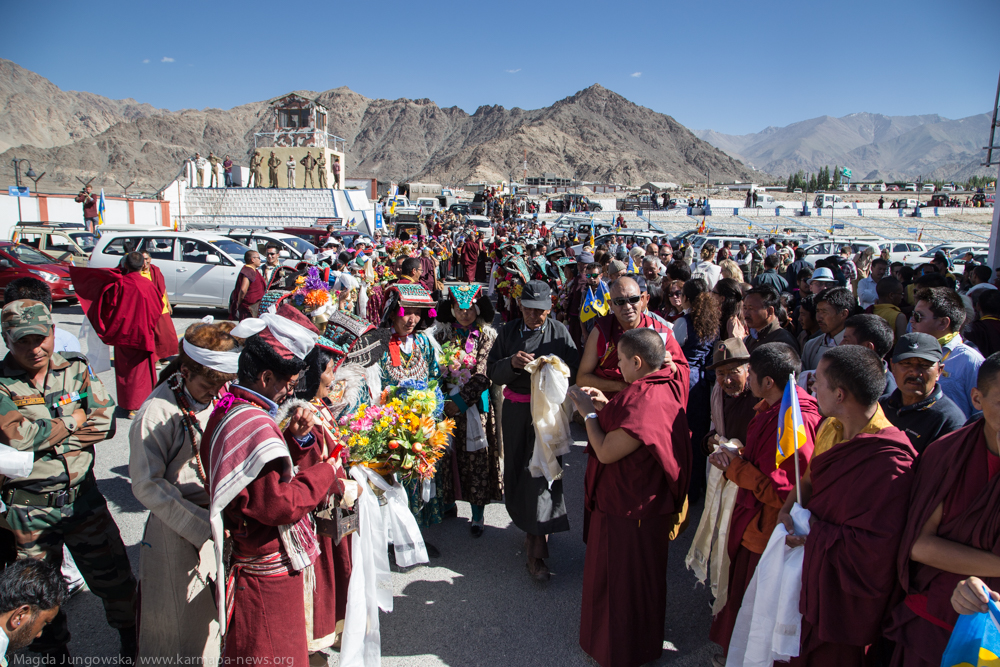 The opening ceremony on the morning of 28 August, with more than 3,000 guests in attendance, began with a ribbon-cutting ceremony, followed by a butter lamp offering and prayers in the main shrine room led by Karmapa. The welcome address was given by Choeje Lama Zopa Rinpoche, followed by speeches by H.E. Choeje Togden Rinpoche and Lama Chonit Dorjee, president of the Karmapa Welfare Society. After a short break for refreshments, His Holiness Karmapa addressed all of the guests in a short speech, followed by cultural performances: Lama dances by Rumtek monks, a Tibetan folk dance (Kagyu Gongma) by Kamtsang Dangling Zhapshu Tsogpa, Ladakhi folk dances by different artists, Tibetan folk dances by Rigjung Public School, the lion dance by Rumtek monks, as well as a harmonica performance delivered by World Champion Mr. Chong from Malaysia. At the very end of the opening ceremony Mr. Tsering Dhondup, Chairman of the organizing committee, expressed gratitude towards Gyalwa Karmapa and all of the guests. After the ceremony Gyalwa Karmapa met with those volunteers and sponsors of Karma Dupgyud Choeling Monastery who had devoted their time and resources to rebuild the monastery and prepare the ceremonies.

The following day, Gyalwa Karmapa led the consecration ceremony of the new main Lhakang, including all the shrines and statues as well as the grounds of Karma Dupgyud Choeling Monastery. In the afternoon he consecrated and blessed Chakchen Jampa Ling nunnery, situated a few kilometers from Leh. In the evening, Gyalwa Karmapa was invited as the chief guest to a gala dinner in Grand Dragon Hotel in Leh, where all the guests enjoyed cultural performances.

On the morning of 1 September, Gyalwa Karmapa led a one-thousand butter lamp offering. Tenshuk offerings were then performed for several hours, giving devotees the opportunity to gather merit by presenting Karmapa with symbols of enlightened body, speech and mind. After a short break Gyalwa Karmapa bestowed the Empowerment of Amitayus (the Buddha of Long Life) to more than a thousand devotees.

On 6 September, His Holiness Gyalwa Karmapa visited Rigjung Public School in Leh. Students of the school as well as local artists performed an extensive programme of cultural performances. H. E. Choeje Togden Rinpoche, Lama Chonit Dorje and Gyalwa Karmapa gave speeches. His Holiness Gyalwa Karmapa gave a teaching about the importance of education, followed by the oral transmission (lung) of a practice on Manjushri, the Buddha aspect of Wisdom. After the public programme, everyone gathered for lunch. In the end His Holiness Karmapa consecrated the entire school, including classrooms, offices and the library.

On 8 September Karmapa performed a ritual for the deceased (Jangchok puja), dedicated to the late Chagzod Ven. Tsultrim Khyenrab and the victims of the recent earthquake in Nepal.

On 9 September Gyalwa Karmapa paid a private visit to the house of Lama Chonit Dorje (President of the Karmapa Welfare Association). In the afternoon he visited the house of Ven. Bagula Rangdol Nyima Rinpoche. After his return, everyone gathered for group pictures in front of Karma Dupgyud Choeling Monastery. In the evening a farewell dinner was held, followed by a vote of thanks to all guests and volunteers.

On the morning of 10 September Gyalwa Karmapa departed from Ladakh to go back to Delhi.

See the galleries from program at Karma Dupgyud Choeling Monastery: