Official Homepage of the Karma Kagyu Tradition
Karma Kagyu is one of the four main schools of Tibetan Buddhism.

Kunzig Shamar Rinpoche’s Homepage
Shamar Rinpoche is known as a Red Hat lama of Tibet. After Karmapa, he is the second in hierarchy of Karma Kagyu Lineage.

Karmapa International Buddhist Society
KIBS is a charitable organization founded by the 17th Gyalwa Karmapa in order to manage various projects of His Holiness. Main objectives of KIBS are education, culture and charity.

Diwakar Buddhist Academy
Research and Educational Institute for monastic sangha, founded by the 14th Shamar Rinpoche in 2002. Placed in Kalimpong, the west of India, the Shedra provides education, research, publications according to the Karma Kagyu lineage of Tibetan Buddhism.

Bodhi Path is an international organization of Buddhist centers established by Shamar Rinpoche (the 14th Shamarpa). Rooted in ancient traditions but with a contemporary focus, our centers are dedicated to offering high quality instruction in meditation and Buddhist philosophy and offer a network of highly qualified teachers trained under Rinpoche’s comprehensive guidance. Programs range from information for newcomers to instruction and support for the advanced meditator.

Dhagpo Kagyu Ling
It is a Center for buddhist studies and meditation in France, founded by XVIth Karmapa Ranging Rigpe Dorje. Jigme Rinpoche was appointed by Gyalwa Karmapa to finish construction and develop Dhagpo.

Diamondway Buddhism
It is an organization found by Lama Ole and Hannah Nydhal, disciples of 16th Karmapa Rangjung Rigpe Dorje. Working tirelessly for over forty years, Lama Ole established more than 600 buddhist centers all over the world.

You can find a full list of Karma Kagyu Centers worldwide at  www.karmapa.org 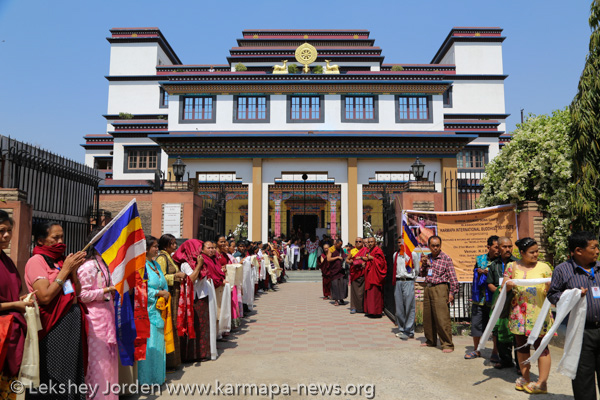