Buddhist practice – in any Buddhist tradition – starts by taking refuge in the Three Jewels, that is in the Buddha, the dharma and the sangha: this is the gate through which one embarks on the Buddhist path, aiming to go beyond the suffering of cyclic existence.

Taking refuge in the Buddha means that the Buddhist practitioner generates deep appreciation and respect for buddha, the enlightened state with all its qualities of wisdom and compassion. He also takes refuge in Buddha Shakyamuni as the authentic spiritual master, as the one who has fully accomplished the state of awakening and therefore has the capacity to show this path to others and to guide them thereon.

Taking refuge in the dharma means that the practitioner dedicates himself to studying and applying the methods taught by the Buddha. This is the process which Buddha Shakyamuni himself has gone through. Applying his instructions means that the practitioner gradually removes all the veils that obscure the true nature of his basic Buddha-mind. In this way, the Buddha-dharma is the remedy against all samsaric delusions.

Taking refuge in the sangha pertains to those enlightened masters who themselves have practiced this path and are therefore authentic spiritual friends to other practitioners. Refuge is therefore taken in the noble sangha as the spiritual guides and friends on the path.

By taking refuge in the Buddha, the dharma and the sangha, a practitioner will be able to achieve enlightenment because this is in his very nature. Based on the potential of enlightenment which is the true nature of mind of each and every individual – perfectly pure in itself –, a practitioner finds access to this potential by relying on the authentic support of the Three Jewels – and the way to do so is by taking refuge in them with trust and confidence.

Taking refuge in the Buddha, the dharma and the sangha protects us from the suffering of cyclic existence: we generate deep confidence to our own Buddha potential and by applying the Buddhist methods we refrain from all those actions that would result in suffering. In this way we are protected from suffering. 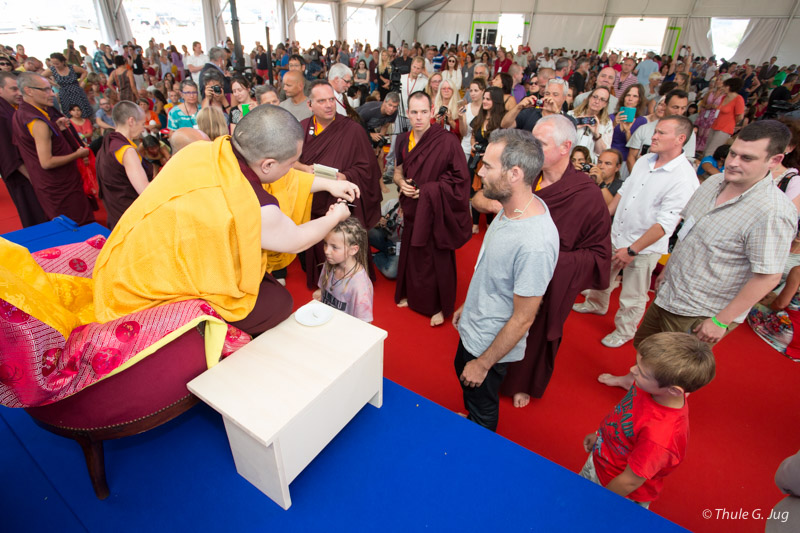 Refuge Ceremony by the 17th Karmapa

We receive the Buddhist refuge from an authentic spiritual master during the so-called refuge ceremony. The teacher first recites various prayers praising the qualities of the Three Jewels. Then he asks the student to repeat the following phrases:

Then the spiritual teacher asks the student whether he is happy with the teacher cutting his hair. This is a symbolic gesture indicating that the new Buddhist will follow in the Buddha’s footsteps who cut also his hair when he first embarked on this spiritual path. Therefore, the students replies with:
Yes, I’m delighted

The teacher cuts a small piece of the student’s hair and gives him the so-called refuge name, an auspicious name indicating the beginning of his Buddhist life. When repeating the refuge verses from above again, the student inserts this new refuge name.

The teacher then snaps his fingers and says:
This is the method
and the student replies:
This is wonderful.
The ceremony is usually concluded with the recitation of auspicious prayers and the dedication of the merit accrued.

Buddha, the enlightened state, is a state of realization and perfect qualities. This is the goal we aim for and – as a potential – it is the actual nature of every sentient being.
The Sanskrit term “buddha” literally means “the awakened state”. “Sang” in the Tibetan term “sang-gye” means pure and purified and “gye” means unfolded, blossemed. “Sang” therefore indicates that the actual nature of mind is pure in itself and that the awakened state is a state where all veils that obscure the mind are completely removed. “Gye” indicates that this realization naturally is qualities – the latent qualities of the mind that have blossomed completely. The qualities of buddha, the enlightened state, are wisdom, compassion, joy, fearlessness etc. and they express themselves spontaneously for the benefit of others.
The historic Buddha of our age, Buddha Shakyamuni has manifested this state of mind approximately 2,500 years ago and has offered his students a path of methods enabling them to achieve the same. For this reason, Buddhists deeply venerate Buddha Shakyamuni as their authoritative spiritual guide and take refuge in him as the spiritual master.

The Benefit of taking Refuge

The Buddha said in the Great Parinirvana Sutra:
By taking refuge in the Three Jewels, you will achieve the state of fearlessness.
And, for example, Gampopa, one of the great forefathers of the Kagyü school, said the following:
“The benefit of taking refuge is eightfold: we embark on the inner, that is to say the Buddhist path; we generate the basis for all commitments; negative deeds from the past will exhaust themselves; hindrances cannot harm us any longer; we accomplish all that we wish; we achieve the great cause of merit; we will not fall into lower states of existences; and we quickly attain buddha, the enlightened state.”

The Training That Goes Along With Taking Refuge

The three fundamental trainings consist of constantly making effort
• to deeply appreciate the Three Jewels and to make offerings;
• to not forsake the Three Jewels even at the risk of our life or for great rewards; and
• to take refuge repeatedly by recollecting the qualities of the Three Jewels.

For more details, please see  “The Jewel Ornamant of Liberation” by Gampopa.