On 9th of August Gyalwa Karmapa and his entourage travelled from Northern Spain to Montchardon in France via Biarritz, Paris and Lyon.

The Karmapa arrived at Karma Migyur Ling late in the afternoon. He was welcomed by Lama Teunsang and Trinley Rinpoche as well as many Lamas and residents. 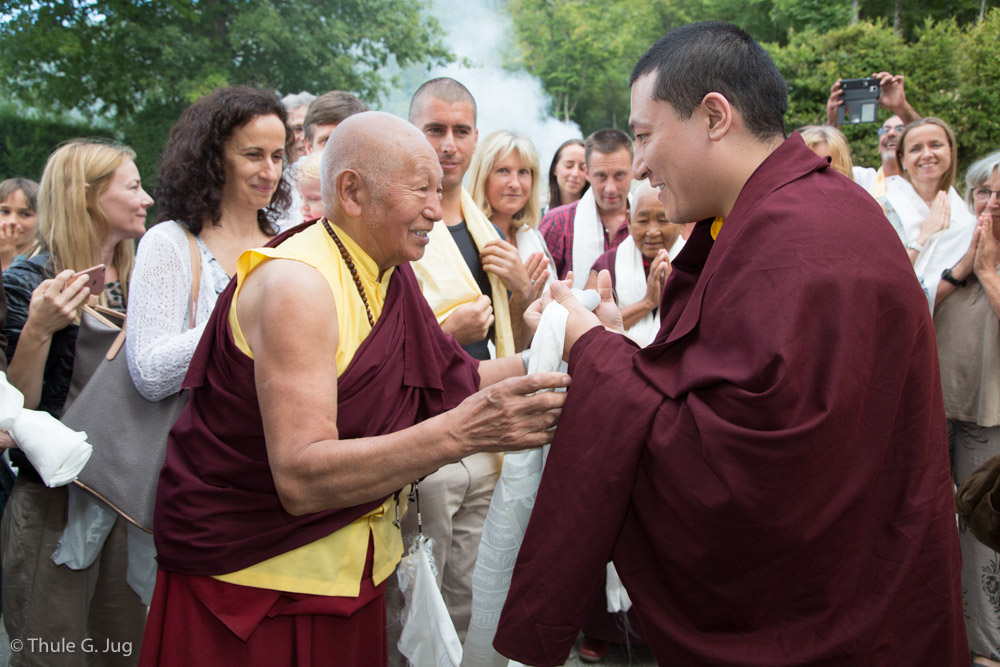 Arrival of Gyalwa Karmapa in Montchardon

From 10th to 15th of August, teachings and initiations took place at the Alpexpo Center in Grenoble.

On 10th of August the Gyalwa Karmapa taught on the Meaning of Refuge.

For the very first time His Holiness’ wife, Sangyumla and members of her family, joined him for teachings. (read more here)

1500 people attended the teachings, including Rinpoches and Khenpos, Lamas and Drublas, with representatives from many European centres. There were lay people from Europe and Asia there to meet His Holiness during his European Tour 2017.

During the morning teaching, the Karmapa pointed out, that taking refuge in the Buddha, does not mean that one labels one’s self as a Buddhist, rather it means to follow in the footsteps of the Buddha, step by step until we reach enlightenment. We are not following someone or something, outside of our mind, therefore confidence in our own mind will help to develop more clarity.
He said, that we should take time, to look at Samsara, to reflect on our life and on the fact that we are never ever satisfied. Should we see that, we may be frightened, but this fear can be a trigger to enter the path and brings us to appreciate the preciousness of our situation so that we can use our time for the way of the Bodhisattva. His Holiness gave many more inspiring teachings, which resonated well with the audience and which were most helpful for a deeper understanding. At the end of the teaching he gave the refuge vows. 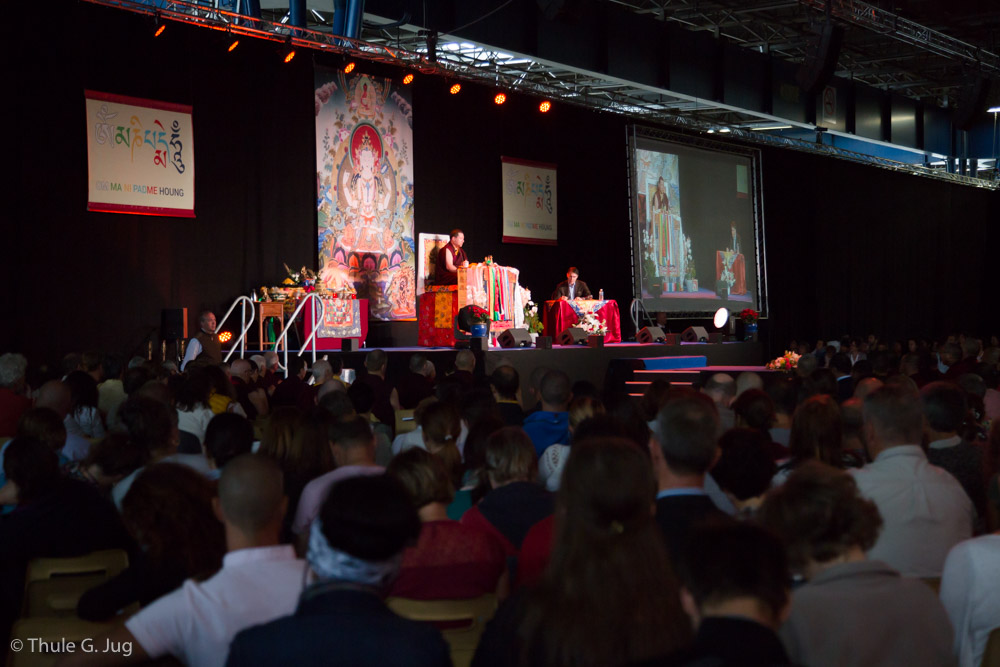 On 11th of August over 1700 people joined the programme.

The 17th Karmapa continued with teachings on “The Way of the Bodhisattva“, incorporating the Bodhisattva vow. At the end of the talk 150 people took refuge for the first time, including the hair cutting ceremony.

The Karmapa encouraged the audience to take up the Bodhisattva Path. He said that if someone has genuine interest in the enlightened attitude, it will be a clear and practical way to go, full of joy. If we are enthusiastic about it, we will not ask what the outcome is; we will just carry on, step by step, from the first thought – what compassion and wisdom might be – and we will develop them both.
His Holiness said:

“As long as there is a caring aspect in an individual, then this is the most stable, strong and grounded foundation to build on: anything will succeed on such a foundation”.

This also means that as a first step, we must care about ourselves and trust our mind to develop respect for all sentient beings. Whatever we do, we can use every means to help sentient beings, therefore a Bodhisattva should not be tired to learn whatever is useful to help others. 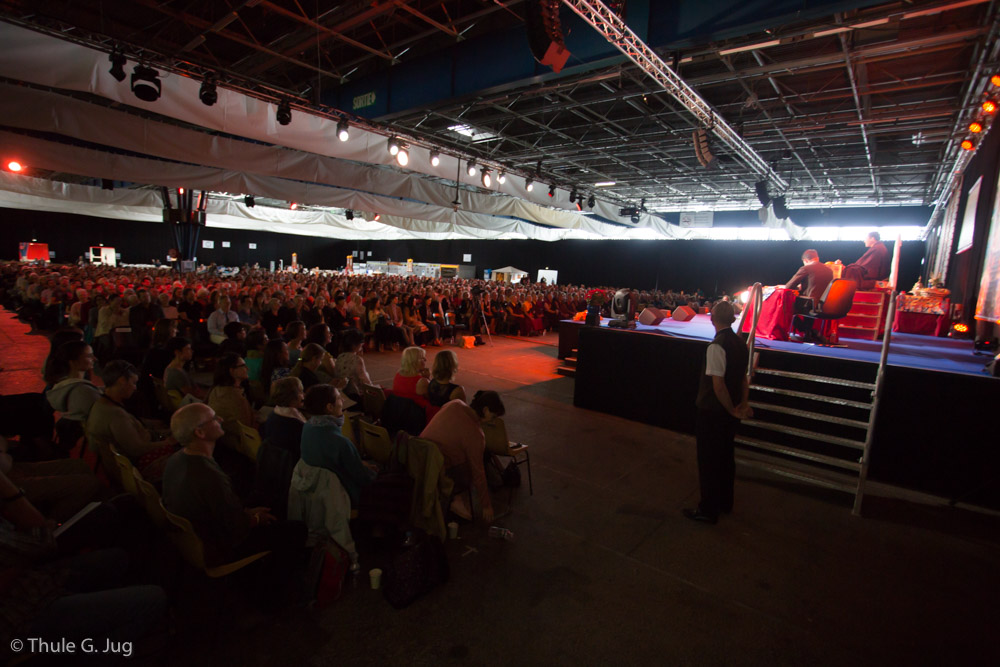 On 12th of August the Karmapa gave a teaching on “The Preliminary Practices”.

Just as in previous days he taught in English and the venerable Trinley Rinpoche provided the translation into French.

Before he started with the teaching, he gave a short speech in Tibetan to welcome all the Rinpoches, Lamas and Tibetans in the audience.
He praised the deep devotion that the people from the Himalaya region have given to the Buddha Dharma for many generations.

In his teachings on the Preliminary Practices, he pointed out that, although it is called the Preliminaries, and known as the basis of all practices of the Bodhisattva, this set of practices includes everything and reminded us that many advanced practitioners practice the Ngondro for their whole life. 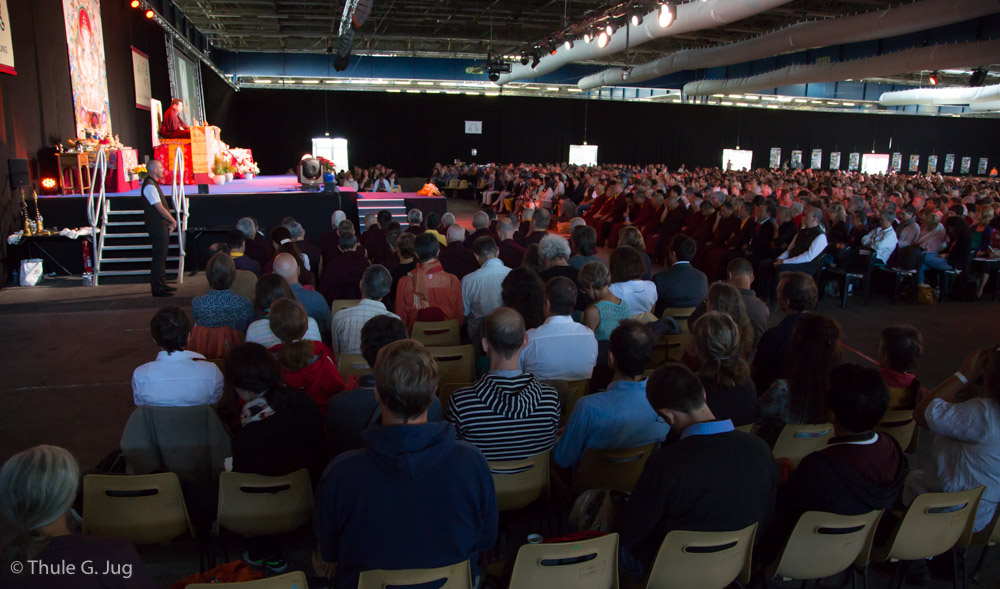 On 13th of August Thaye Dorje, His Holiness the 17th Gyalwa Karmapa, gave a Chenresig Empowerment in Grenoble.

On this occasion, more than 2000 people came for the empowerment to get in touch with the wisdom aspect of Avalokiteshvara.
The Gyalwa Karmapa introduced the audience to the practice. The practice originated from none other than Buddha Sakyamuni himself. Many realised masters came to the Himalayas and followed this practice. To this day it is practiced in the same way. In the Chenresig practice and meditation we focus on loving kindness and compassion.

The guide, the practitioner and the methods are the underpinning of the practice of Vajrayana Buddhism. Bodhicitta should be developed, the master should be authentic and show the characteristics of a Bodhisattva. The student should be ready and confident in the qualities of the teacher. The practice needs to be passed on according to a certain procedure. The basis for it is aspiration, taking refuge, developing Bodhicitta and receiving the empowerment (wang), the oral transmission (lung) and the instructions (tri).

Then the Karmapa gave the initiation and people queued for over 2 hours so that each of the participants received a blessing.

On 16th of August His Holiness Gyalwa Karmapa spent the day in Karma Migyur Ling. He spent  the morning in the Drubkang caring for the retreatants

In the afternoon, Gyalwa Karmapa gave an interview with AFP (Agence France Press) followed by another with a film team from Montchardon.

At the end of the day Karmapa spent time with the residents from Montchardon.

09.08.2017 Arrival and Reception of Gyalwa Karmapa in Monchardon, France

10.08.2017 Teaching and Refuge Ceremony Given by Gyalwa Karmapa in Grenoble

11 – 12.08.2017 Gyalwa Karmapa Teaching About Buddhist Preliminaries and the Way of the Bodhisattvas

13.08.2017 Gyalwa Karmapa grants Chenresig Empowerment to over 2000 practitioners in Grenoble