On 26th September, Thaye Dorje, His Holiness the 17th  Gyalwa Karmapa and his entourage travelled from New Delhi to Kuching, the capital of Sarawak, Malaysia, for a seven day visit.

Gyalwa Karmapa was warmly welcomed by a large gathering of Karma Kagyu students, Rinpoches, lamas, monks, nuns, lay Buddhists from many different countries who had arrived a few days earlier and local devotees. The organizer for the Kuching visit was Kuching Karma Kagyu Dharma Society (KKKDS);  the occasion was the inauguration of their newly rebuilt Buddhist centre. This was the first event on His Holiness’ South East Asia tour this year. 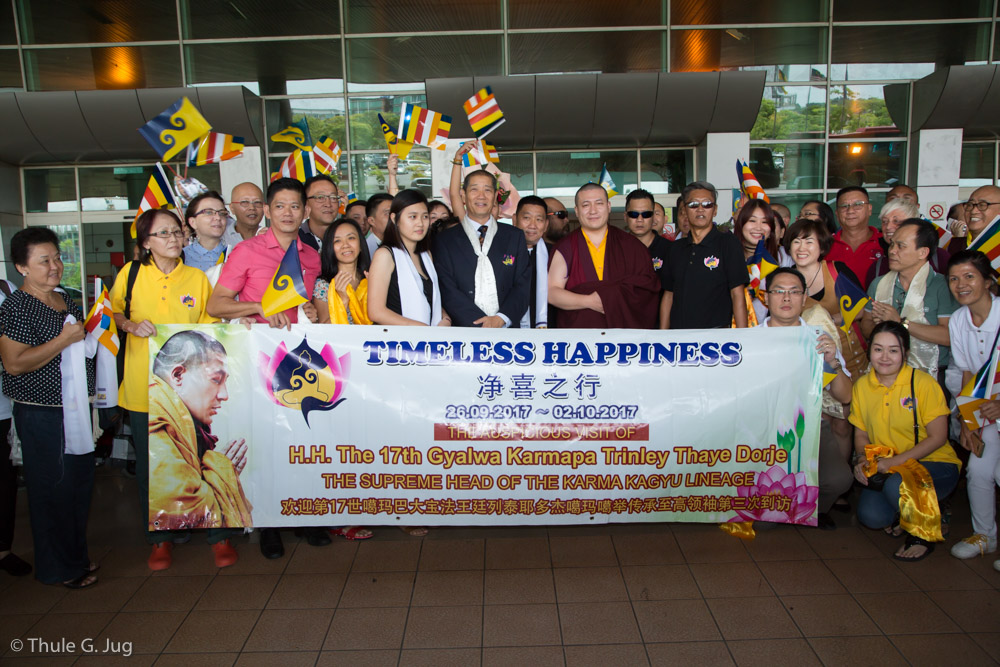 His Holiness  Gyalwa Karmapa arrives at Kuching International Airport and is welcomed by the local organisers, venerable teachers, monks, nuns and many followers. 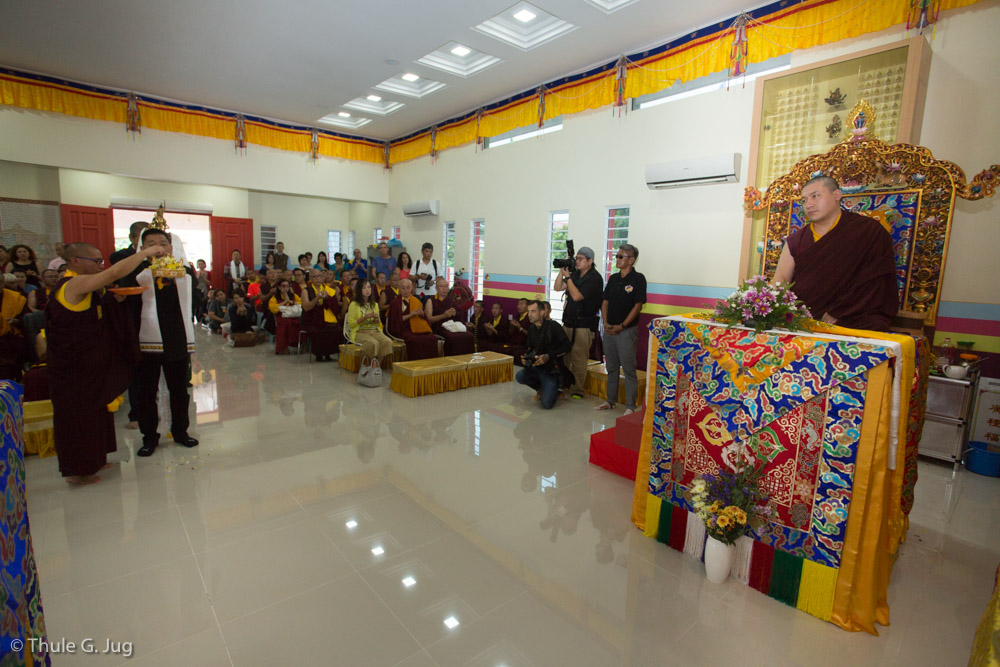 His Holiness Gyalwa Karmapa arrives at the new Kuching Karma Kagyu Dharma Society. Welcoming ceremony and body- speech- and mind offering by the people in charge of the center.

On the morning of 27th September, His Holiness Gyalwa Karmapa and YB Senator Datuk Prof. Dr Sim Kui Hian (Minister for Local Government and Housing) presided over the opening ceremony at the newly rebuilt Dharma Centre.  Many respected Rinpoches, lamas and devotees from Malaysia and other parts of the world took part in the event. His Holiness later consecrated a mini stupa holding a relic of the ancient Buddha Kasyapa. Auspicious prayers were recited and His Holiness performed the rabne or traditional consecration ritual for the newly rebuilt Dharma centre. A vegetarian lunch buffet was served to all those attending the event. 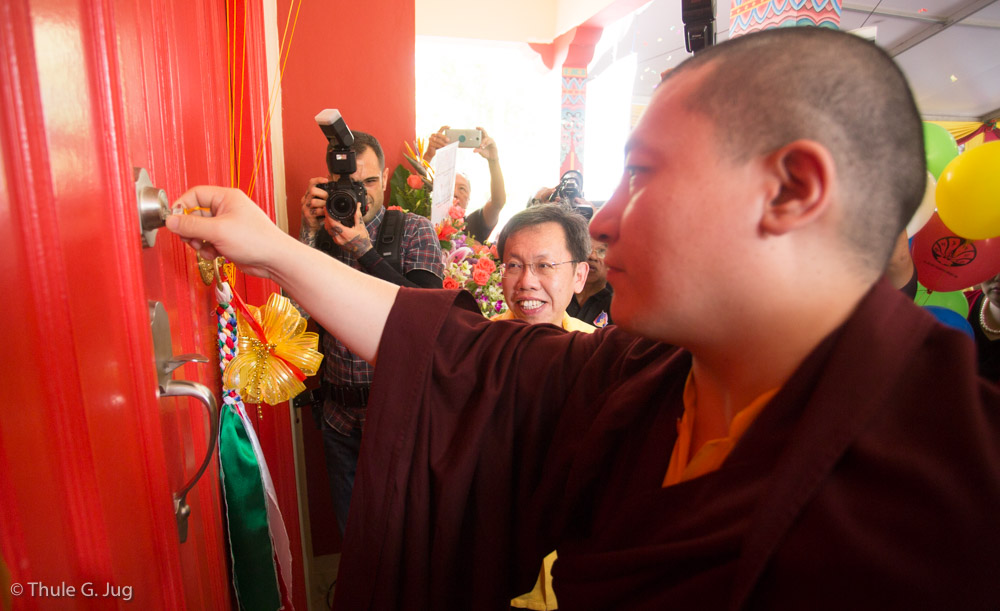 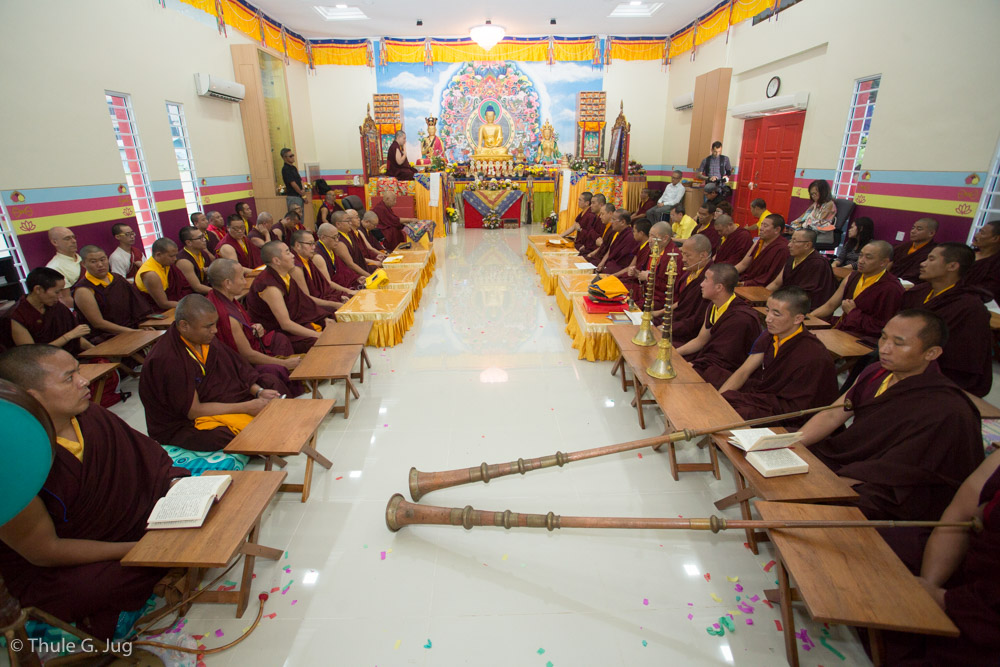 In the afternoon, His Holiness Gyalwa Karmapa bestowed Dzambhala (aspect of richness) empowerment. During the empowerment, Gyalwa Karmapa taught how to aspire to become a “nobody”. He stressed that when we aim to become someone we are not, we are bound to fail. Prompted by the idea that we are lacking something in the conditions we have now, we strive to become more than who we are, or strive to have something that we do not have. This can be in terms of wealth, prosperity, health, and so on. When we realize that becoming that somebody will not give us ultimate happiness, we will then turn our minds to refuge. When taking refuge, developing bodhicitta and maintaining the pure perception that stems from tantric initiation, the goal is to become a “nobody”. These are all ways to create conditions for us to let go of our attitudes, our ideas and our personalities. After that Gyalwa Karmapa reminded us to reflect on three things: the meaning of Refuge, the meaning of Bodhicitta, and the nature of nobody. 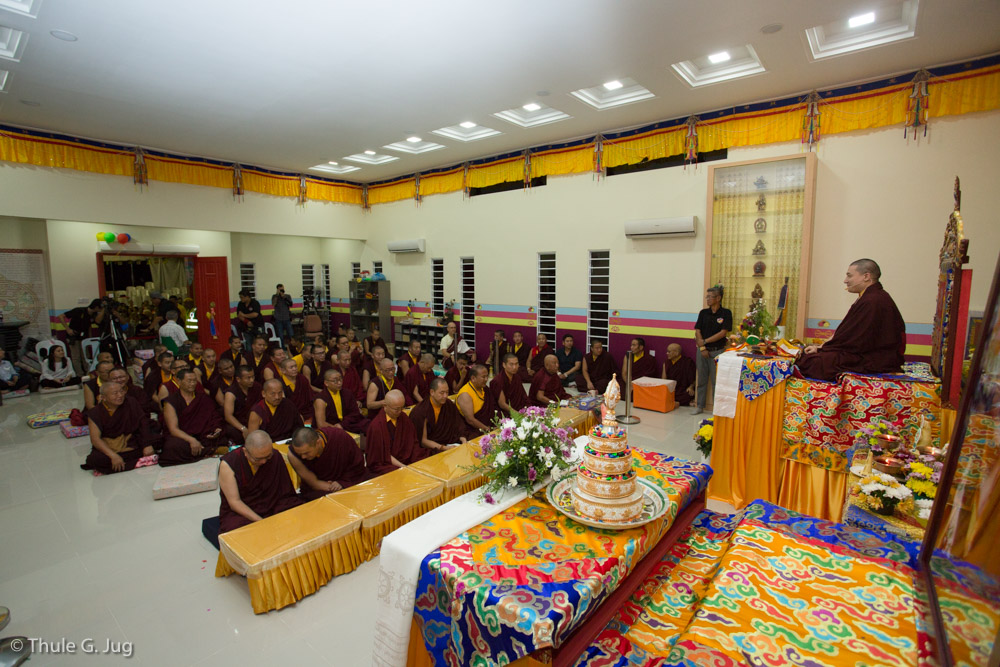 His Holiness Gyalwa Karmapa gives an empowerment of Dzambhala

Next morning, His Holiness Gyalwa Karmapa, Rinpoches and the sanghas performed a Naga Vase Puja on board the Sarawak River Cruise boat. Upon completion of the ritual, lunch was served in the boat. 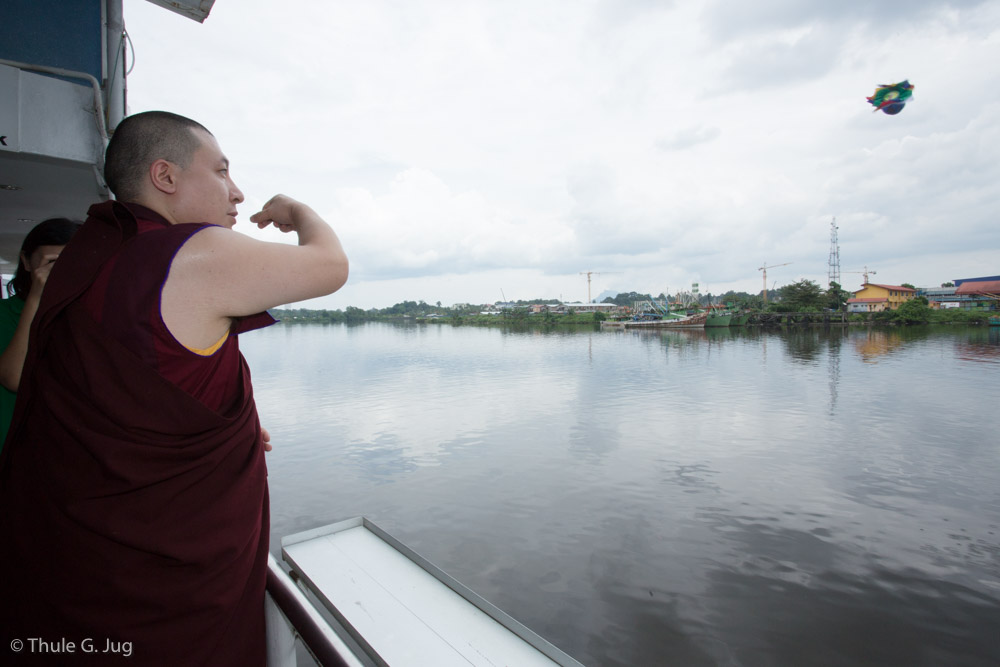 His Holiness Gyalwa Karmapa, Rinpoches and monks perform a Naga Vase Puja on board of a Sarawak River Cruise boat

In the evening Gyalwa Karmapa was invited by Mr. Fernandez Ong and his family to their house for dinner. Rinpoches, lamas and friends of the family were also present.  First, the Ong family offered Ku Sung Tug (body, speech and mind) to His Holiness.  Dinner was then served to about eighty guests. The Ong family is one of the main sponsors of the Dharma Centre in Kuching. 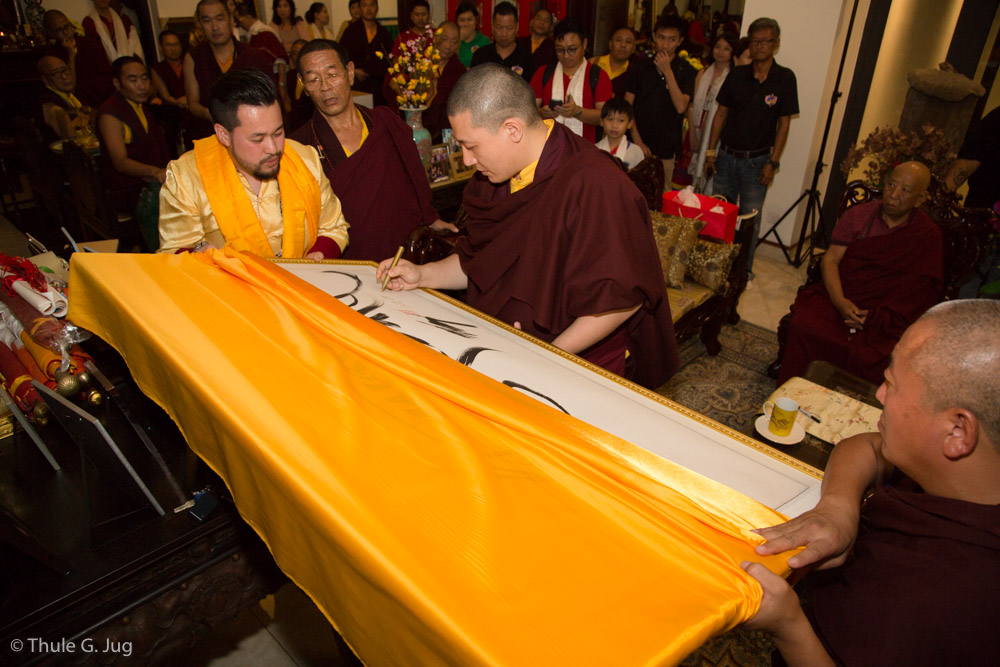 His Holiness Gyalwa Karmapa is invited by Mr. Fernandez Ong and his family. Rinpoches, Lamas and friends of the family are present as well.

In the morning of 29th September, Gyalwa Karmapa, together with the Rinpoches and sanghas, conducted a fish releasing ceremony where after a short prayer, fish were released into the river. It is said that the saving of lives is one of the most virtuous activities. 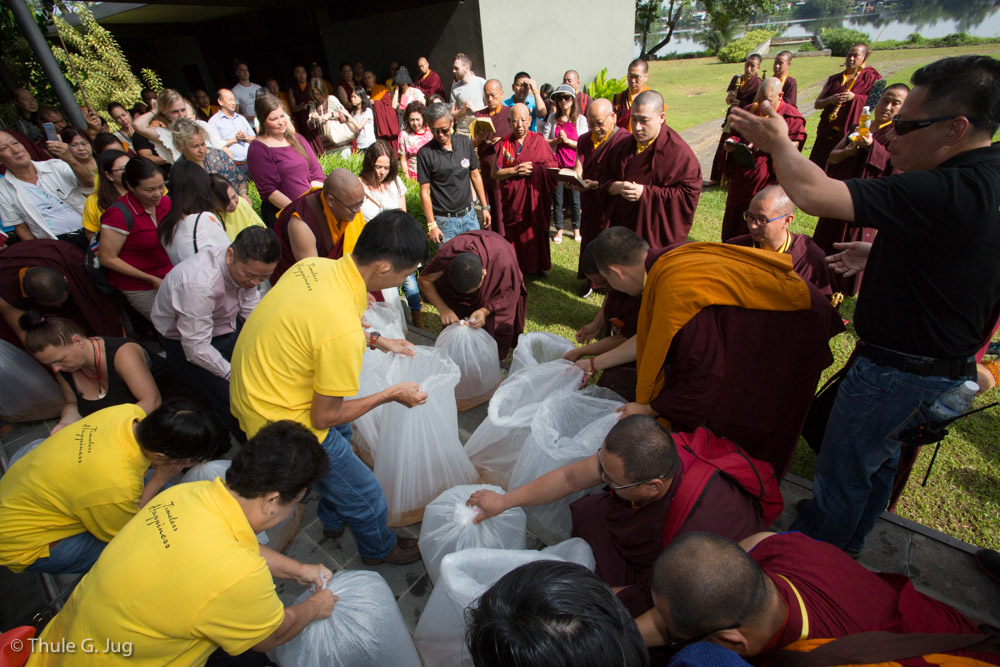 Later that day,  the first session of a two-day Grand Kagyu Monlam started, the first to be held in Kuching, Sarawak. The venue was the function hall of KTS Garden. Gyalwa Karmapa, the Rinpoches, lamas and nuns started reciting aspiration prayers for world peace. Lay practitioners in attendance joined in the recitations.  That evening, the main sponsors of the Dharma centre and devotees gave mandala offerings to Gyalwa Karmapa. 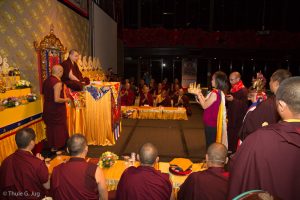 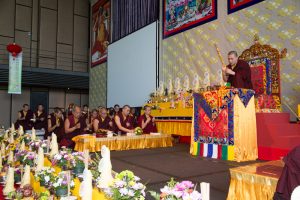 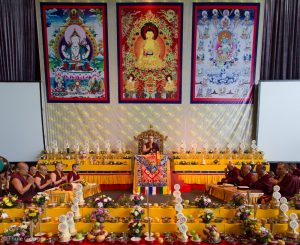 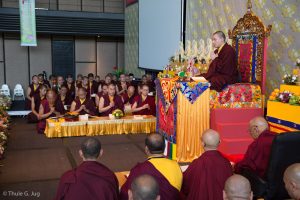 The second day of the Kagyu Monlam began at 10 am with a Chang Chog Puja. This is a ritual for the deceased, ending with the burning of the names of the deceased which had been written on pieces of paper,  wishing them a better rebirth. That afternoon, the last session of the Kagyu Monlam Prayers was held, followed by all the Rinpoches offering mandala to Gyalwa Karmapa. The first Grand Kagyu Monlam in Kuching, Sarawak concluded with dedications and flower offerings. 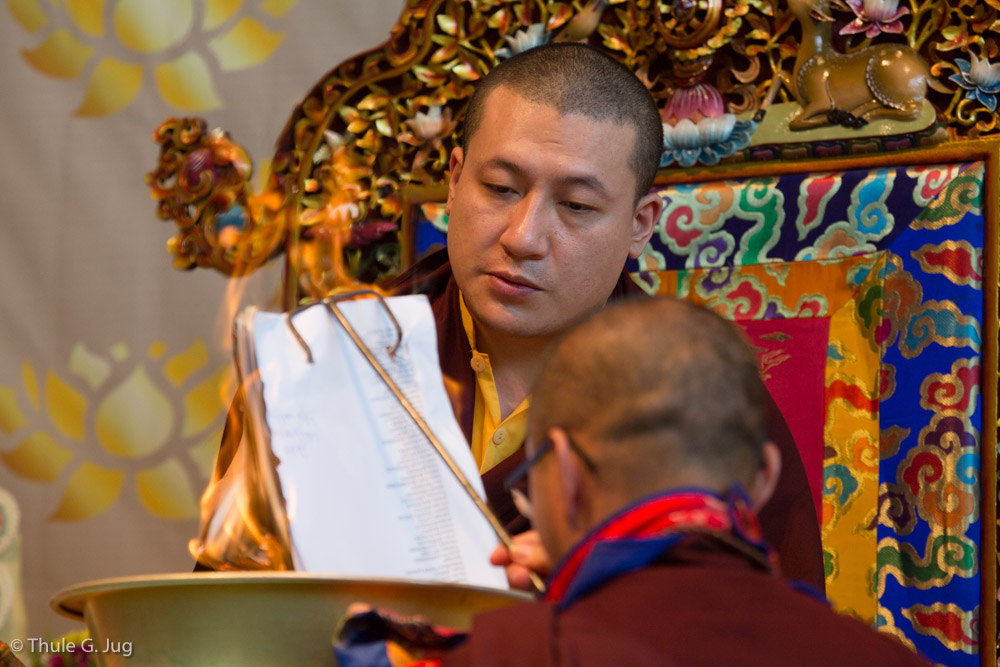 Chang Chog Puja for the deceased 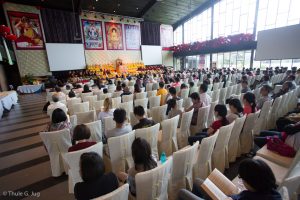 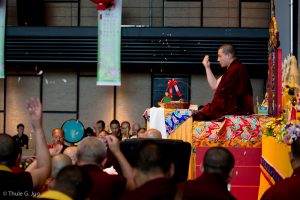 In the evening Gyalwa Karmapa and his entourage as well as all the Rinpoches and sanghas were invited to the house of Mr. Tan Chiang Kung for dinner. Mr Tan is also a main sponsor of Kuching Karma Kagyu Dharma Society. 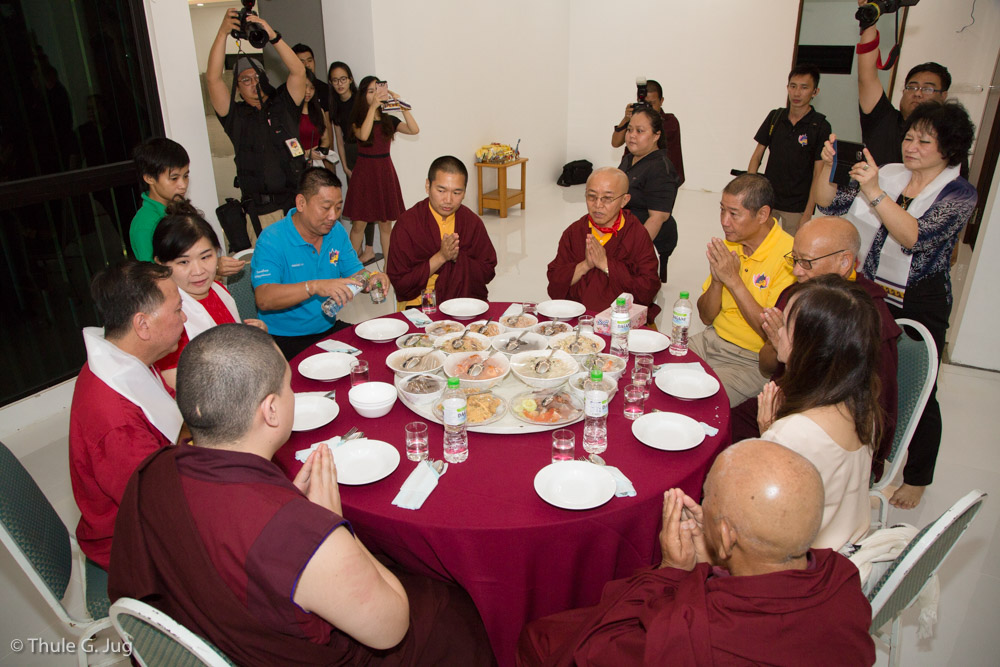 Mr. Tan and his family invides HH Gyalwa Karmapa and all the Rinpoches, Lamas and friends for dinner to their house

On the morning of 1st October, the scheduled programme was public blessing by Gyawla Karmapa for a huge crowd of devotees.  Gyalwa Karmapa then gave about two hours of teachings. Part of the teachings touched on “expectations”.  Gyalwa Karmapa used the example of Dzambala practice. As Dzambala is said to bestow wealth, health and all things material and spiritual, naturally most people who practise the ritual of this deity expect returns. In Dzambala practice, one does water offerings. Some or most people expect returns and more often than not, end up disappointed. Gyalwa Karmapa said there are people who wondered why they have become poorer in many areas , be it in wealth, health, etc. after practicing Dzambala even for long periods of time. He explained that it’s because Dzambala or any other Dharma practice is more about giving rather than receiving: that we practise for the benefit of all sentient beings. Gyalwa Karmapa advised all those present to just continue with one’s practice without expectations and that Dharma practice is all about letting go. He then gave the lung (oral transmission) of the mantra of Chenrezig to those present. 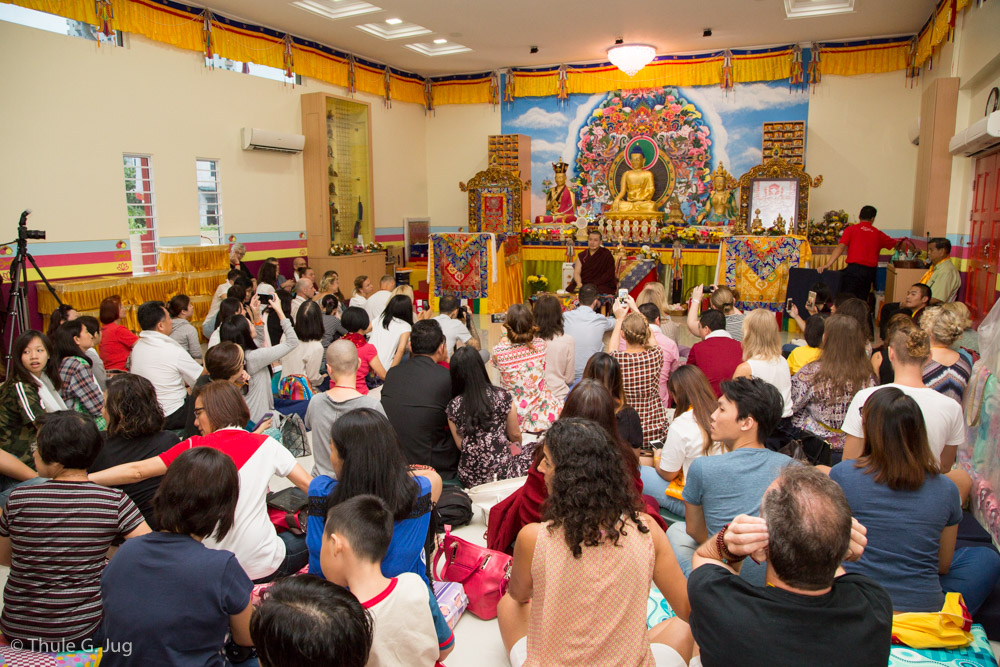 The programme in Kuching concluded with a Gala Dinner to celebrate the 43rd anniversary of the Kuching Karma Kagyu Dharma Society. There were performances of cultural dances and traditional music. Then Gyalwa Karmapa gave a speech. This was followed by a presentation by Miss Diane Brodkorb, who came from Delhi to give an interesting presentation on the South Asia Buddhist Association (SABA) which is a charitable trust under the patronage of Gyalwa Karmapa. The highlight of the night was a Go Bald fundraiser for SABA. Some of the working committee (including a lady) volunteered to go on stage to have their heads shaved to raise funds. Gyalwa Karmapa shaved these five volunteers before the hairdressers took over, and those present at the dinner started making donations. A total of 80,000 Ringgit Malaysia was raised  for SABA. The dinner concluded with speeches by representatives from other Dharma centres in Malaysia, and the presentation of appreciation tokens to the main sponsors for Gyalwa Karmapa’s programme in Kuching. 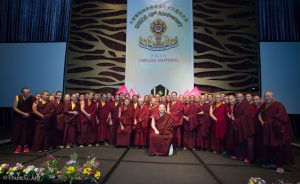 Final group pictures with all Lamas and Gyalwa Karmapa 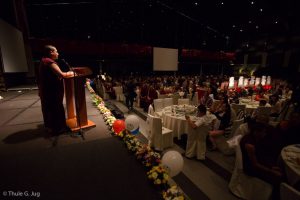 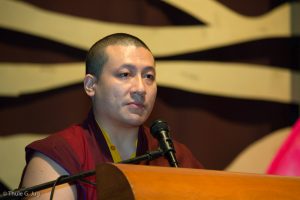 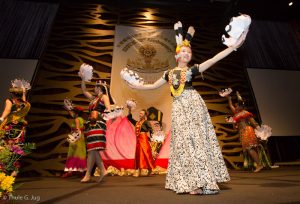 Early next morning, devotees gathered at Kuching International Airport to bid farewell to Gyalwa Karmapa and his entourage before they departed for Singapore. 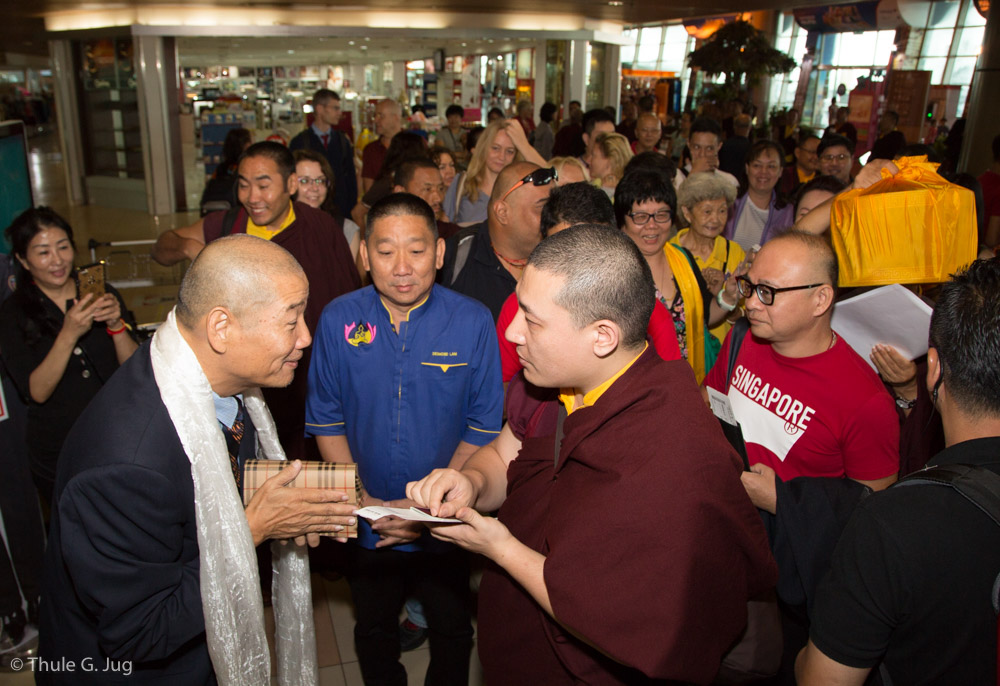 Gyalwa Karmapa and his entourage depart from Kuching to Singapore