Karmapa teaches on the practice of nonviolence in Buddhism 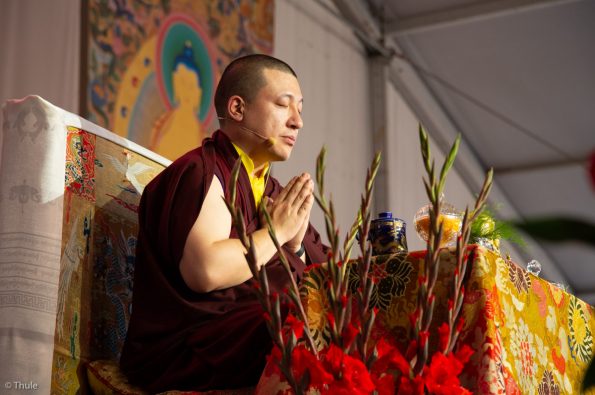 Thaye Dorje, His Holiness the 17th Gyalwa Karmapa, teaches on the practice of non-violence in Buddhism.

As human beings, during our hundreds of thousands of years of existence, we have developed countless religions, philosophies and political systems. All of these systems have been based on various sets of rules and laws, which are originally intended out of goodness, but nevertheless, when it is a case that they are not well understood, well practised or well taught, then problems like the ones we are seeing at the moment will always continue to arise.
In my approach to the topic of non-violence, I would like to try and rely on this most ungraspable of notions: that form is emptiness and emptiness is form. If I were to try to give an answer for non-violence or against violence, it would be like all of these other things that were invented before, and it would simply fade into a kind of background noise and nothing more.

Of course, I could say things like, “Don’t give in to violence, but be kind. Racism is not good, so don’t give in to it.” I could say all of these things, which are true, but it wouldn’t do any good – it will just touch the surface.

So if non-violence is preached or taught or presented in the form of laws or rules, then it doesn’t really work. Because although laws do have their own quality, the problem is that we see laws as absolute, as ‘it’, and then, right there and then, we have failed.

Not to say that Buddhism is the way, but according to Buddhism we always focus on this practically uncatchable factor: that form is emptiness and emptiness is form. And there we have the answer.

So there is a good reason why Buddhism talks about non-violence from the perspective of the inseparability of form and emptiness: because it is not about commandments.

Reflecting on current events can be a delicate thing. How much should we reflect? There are so many news stories out there – how much energy should we devote to all of this – and if we devote a lot of time and energy to it, we may naturally ask ourselves how much control we have, and if there is something we can do about it?

One cannot help but feel that there seems to be an abundance of choices, and as result we feel confused between them. Which position to take?

Once our thinking or ability to reflect is present, the idea of choice is overemphasised at times.

Then even a Buddhist will sometimes feel that we have to choose the side of either form or emptiness. Samsara or Nirvana, right or wrong, day or night, here or there, black or white. Endless lines of choices simply overwhelm us.

That’s why Buddhists enquire through reflection (meditation) as to whether there is benefit by seeing the sides as inseparable.

Inseparable not because things are fundamentally murky (so mixed up that you cannot separate the two sides), and so you have to just accept them with your eyes closed because there is no other way.

Rather, inseparable in the sense that emptiness complements form and form complements emptiness in the most harmonious manner. So you embrace their inseparability, in the same way you embrace resonance. The strings of a guitar need the body of the guitar to produce a real sound, through the body echoing the vibrating strings.

Similarly, these opposites are not the same, yet at the same time they are not separate. It is a fine line to walk.

So this is the manner in which we could reflect.

It is understandable that we are a little frustrated, not just because of the current pandemic but because all of us have faced various challenges – throughout our individual lives we have experienced many personal grievances, and throughout our collective lives we have met with historical conflicts that can sometimes be traced back over several generations. It is endless.

And on top of that, every now and then, a particularly tragic event occurs, and when it does, then as humans who are dependent on historical, linear concepts, we have no choice but to feel that it is a personal thing, and to take it very seriously. And if we then reflect on it from a perspective based on what’s morally right or wrong it is impossible to find a definitive answer.

However, if we don’t overburden ourselves with an original cause and an original effect it is possible to find a middle way. A way where we see violence of any kind, exterior or interior, evaporate upon emergence.

Yet, the residual-like experience of any violence echoing inside our head may be a thing to contemplate on, because these echoes last somewhat longer than the actual sound, as it continues to resonate. But of course, eventually it will disappear altogether.

So while this echoing is still persisting, rather than just letting our consciousness’ forgettery do its thing, we can instead do something that is drastically different from what we have always done. (We have been intoxicating ourselves to the point of destruction of both our body and mind, till it comes full circle, till it leads to a reset. This process is one where we can’t really differentiate between forgiving and forgetting. We want to somehow forget, by various means, what we feel in our bones to be tragic, unpleasant, malevolent, in an outwardly manner, as if all of these tragic and unpleasant sensations were things that are foreign, that came from somewhere else – alienating this experience in such ways, and simultaneously through that gesture alienating ourselves.)

Even though the actual violence is long gone, we are still hanging on to that resonance, thinking that that resonance is so important, all the time staring at a mental screen of what has happened and believing with utmost devotion that it is the reality.

So the cause for actual violence has already left, that moving and elusive target has already passed by, yet we still remain extremely devoted and want to believe that the target is still there, and we want to throw a dart at it. But the target is not present any more; it’s gone, absolutely gone. And that kind of vicious cycle causes us not to forgive – as though we tattoo ourselves with a symbol not to forgive. And we desperately hope that the next chance we get we will strike back with a vengeance.

As a result, when the next similar moment appears, we forcefully identify that similar appearance as if it were the same one.

So the question is, to whom do you apply the morally justified violence?

Therefore, at some point, reflecting on the inseparability of how things form and how things fall apart (due to emptiness) may elicit a wisdom that is fresh, new, a wisdom that is not from the future and not from the past, but from this explicit transient moment. And that’s how actual Buddhists embrace this: not as a new trend or a new fashion, but with a fresh, present, vibrant flow.

So, in short: it’s alright to attempt to extinguish exterior violence with the help of reasoning. The same could be said of extinguishing interior violence. But intrinsically, an acceptance of the ever-changing formations of doings and happenings is, I daresay, most essential when practicing non-violence.

My dear dharma friends, and friends of friends, allow yourselves not a moment of silence, but a moment of reflection, of contemplation if you will, about these words.

« Karmapa gives teaching on the anniversary of the parinirvana of Shamar Rinpoche
Karmapa shares a teaching about guardians in his latest Meditation for our Times. »
Please share
Latest Gallery
Audiences with Karmapa during Kagyu Monlam 2019