Karmapa shares a teaching about guardians in his latest Meditation for our Times. 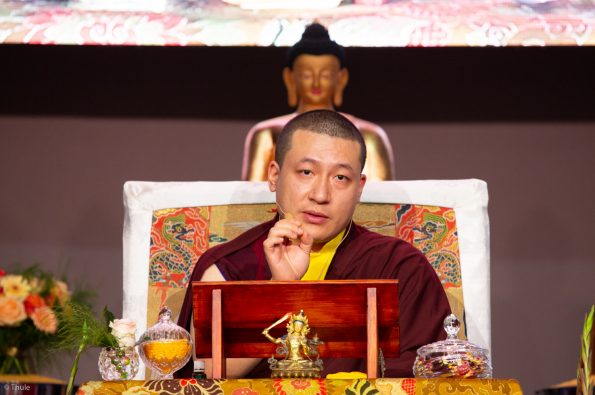 Karmapa shares a teaching about guardians in his latest Meditation for our Times.

Once again, I’m taking this occasion to share a little of my knowledge of Buddhism.

The subject today could be guarding or being a guardian.

I don’t know for certain, but it seems to me that Buddhism is such that one can pick up practically any topic from pretty much anywhere. In this way, Buddhism is useful for starting a conversation – not that this is its only use of course.

One of the reasons for this is that Buddhism itself doesn’t really have any topics that are off-limits or considered as provocative, even though due to various cultural factors such taboos seem to exist.

For instance, in some Buddhist countries talking about death is superstitiously avoided or considered as blasphemy.

Sometimes, the more provocative the subject, the more Buddhism has to contribute, meaning that even if the topic of conversation may be taboo, Buddhism often has this quality that it won’t let the conversation become awkward.

If you let an enthusiastic and passionate Buddhist join the chat, in fact Buddhism can give meaning and life to the previously off-limits discussion.

Humour – of a kind – will complement the conversation and end it without awkwardness.

Now, just like the notion of time, the notion of a ‘guardian’, the image of a protector – whether that notion is visualised as a person or not – is a concept that has been deeply ingrained in us ever since we were first able to think.

Without going into an endless debate of who or what a guardian is, and the related questions of why, when or how, it might be simpler to delve right into the Buddhist perspective of this guardian.

The guardians of the four directions or the ten directions are both metaphysical and practical perspectives of Buddhism.

The practical perspective may be surprising, because Buddhism is often seen as nihilistic, due to its heavy emphasis on emptiness, and so the notion of a ‘guardian’ seems like a contradictory subject to introduce.

Why do we talk about guarding something if everything is empty?

Actually, to satisfy those who have a habit of thinking that everything is here and everything is real, Buddhism agrees with them by accepting the idea that there are guarding entities.

Metaphysical, because in parallel with the practical perspective, Buddhists know well enough that accepting and agreeing with the idea of having guarding entities creates an opening to introduce emptiness for those who are more fixed in their habits of reality – those who firmly believe that everything is real and that there is something to guard.

And the way it is introduced is in the form of asking questions such as:

Who guards the guardians?

And if there are guards for the guardians, who guards them?

What is it that the guardians guard?

These questions are intended to bring out the fallacy of being stubborn in believing that there is something to save.

In other words, the skill of the metaphysical method is to have a little peek at the marvel of emptiness, rather than seeing emptiness as frightening.

For example: a doctor is a form of guardian.

The obvious purpose or the function of a doctor is to keep his or her patients alive.

But if one stubbornly believes that staying alive indefinitely and never dying is real, in other words that immortality is real, then right there and then the doctor has become obsolete. Because that just can’t be done.

Well, funnily enough, the Buddhist understanding is that actually one can attempt to guard – if one accepts that it can’t be done, meaning that it is just to comfort the patient and stop him from over-worrying.

It’s like a kind, starving mother who tries to soothe her equally starving child by assuring him that tomorrow food will arrive in abundance and describing how they will enjoy it, even though she knows that there is no certainty.

Somehow, due to that white lie, she is able to comfort the child and get him to sleep.

This shouldn’t be taken literally, as it is just an analogy..

So, in other words, guards, cures, protections, safety nets, are all just temporary measures – ཐབས། (THABS) in Tibetan, UPAYA in Sanskrit, and usually translated into English as ‘skilful means’.

Skilful means are not necessarily a means to get somewhere, as if there was a destination to reach – rather, they are a way to make the present experience free of worries.

When we take the term ‘skilful means’ too literally and understand it as a means to actually get somewhere, it builds up pressure, as if we had to put up with this white lie forever.

Whereas, if we relate to it less literally, then we arrive at a sweet spot and understand that it’s just a way to free the current moment of worry or anxiety.

In this manner, Buddhas and Bodhisattvas appear in myriads of forms to guard sentient beings.

At first, they don’t deny sentient beings’ beliefs, even though these beliefs have no essence.

At the same time, that very act of the Buddhas and Bodhisattvas creates enough doubt in those who have stubbornly held beliefs, by asking them questions, as if they didn’t know the answers and letting sentient beings arrive at the answers by themselves.

Finally, when sentient beings do find the answers, they no longer need guarding.

And the Buddhas just disappear.

Meaning the Buddhas take no claim for their merit.