On the 19th May His Holiness the 17th Karmapa arrived in Malaysia for an extensive ten day program of Buddhist activity. The activity included empowerments, teachings, Vesak celebrations and also the very first Kagyu Monlam held in the country.

The Karmapa arrived in KL International Airport where he was warmly welcomed by Sang Sang Rinpoche, Khedrub Rinpoche, Sangha and devotees. He then was officially greeted by the Karma Kagyu Dharma Society of Kuala Lumpur who gave him a traditional reception. A mandala offering led by Zopa Rinpoche closed the first day proceedings. 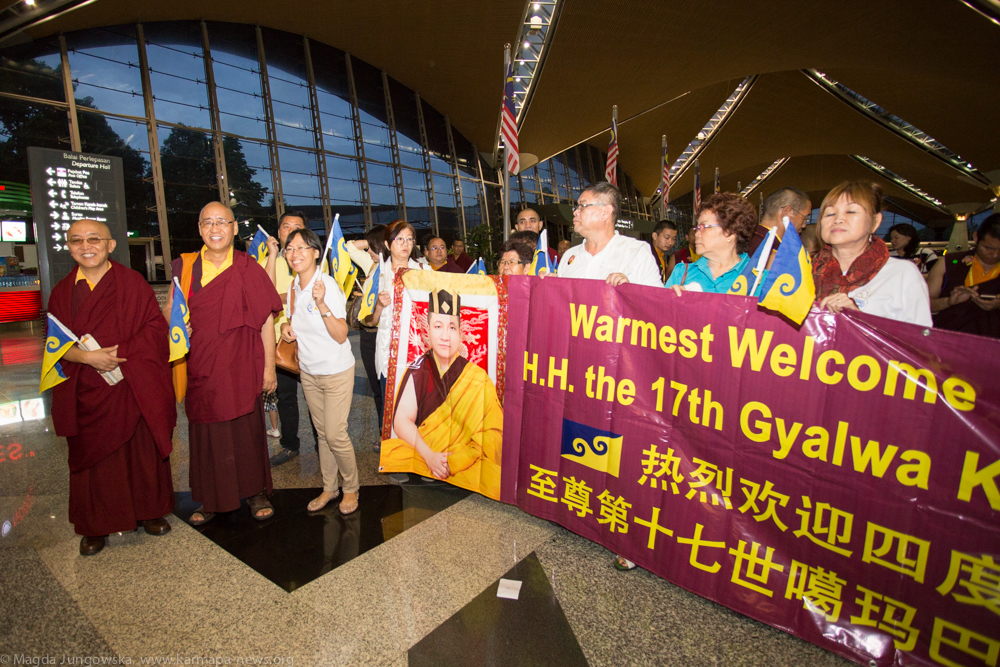 The day’s main activity involved His Holiness leading an Amitabha long life puja and Tsog offering with the Sangha.   In the evening His Holiness gave teachings about the meaning of Vesak. Vesak is one of the most important celebrations in the Buddhist calendar. It commemorates the birth, enlightenment and parinirvana of the historical Buddha Shakyamuni. 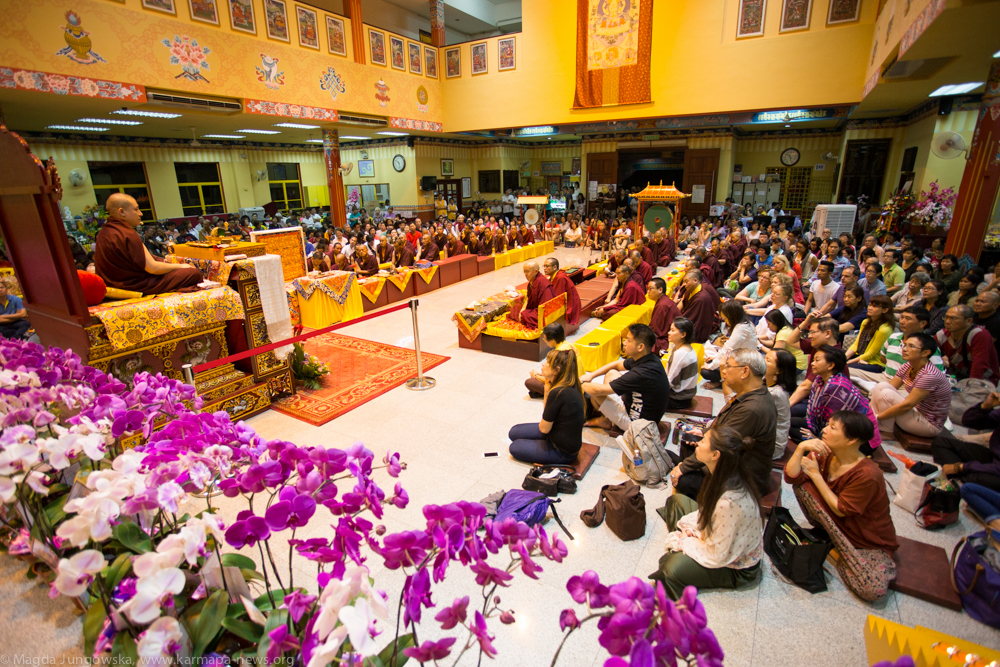 After the teaching, Gyalwa Karmapa led a Chenrezig practice, followed by the “Bathing Buddha” ceremony. Bathing Buddha is a traditional ritual to purify one’s own negative karma. The symbolic action of washing the Buddha is not for the benefit of the Buddha himself. It actually symbolizes the cleansing our own obscurations of mind, washing away the veils that obscure our own inherent perfect Buddha nature.

Gyalwa Karmapa led a Shakyamuni Buddha & 16 Arhat’s Puja to open Vesak Day. After the prayers were completed he gave an individual, personal blessing to all of his students who were present at the ceremony.

Buddhist Maha Vihara in Brickfields. The Venerable Chief of Maha Vihara, Dharmaratna welcomed Gyalwa Karmapa and together they paid their respects to the main Temple.

After a light lunch with the Sangha, it was time for the official opening of the Vesak celebrations with all of the Buddhist traditions present; Theravada, Mahayana and Vajrayana.

The first introductory speech was from the special guest, Dato’ Sri Liow Tiong Lai, the minister of transportation and representative of the government. Gyalwa Karmapa then led some short prayers and the official ceremony was started when each of the representatives of Vajrayana, Mahayana and Theravada Buddhism lit lamps signifying the beginning of the Vesak procession. Gyalwa Karmapa was the leading spiritual guest for the annual procession, in which over 25 000 people attended. 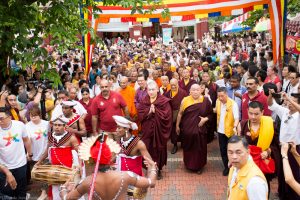 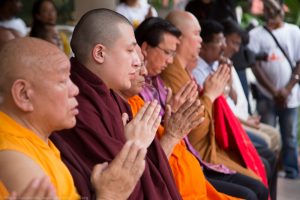 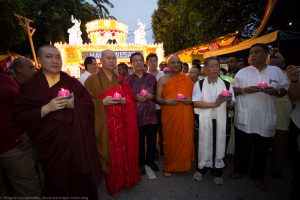 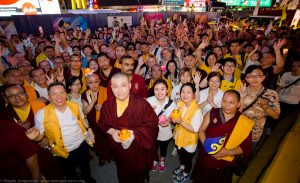 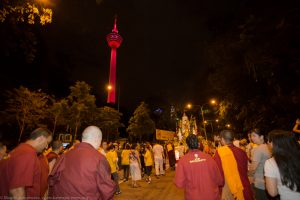 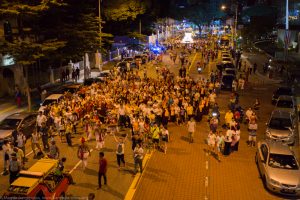 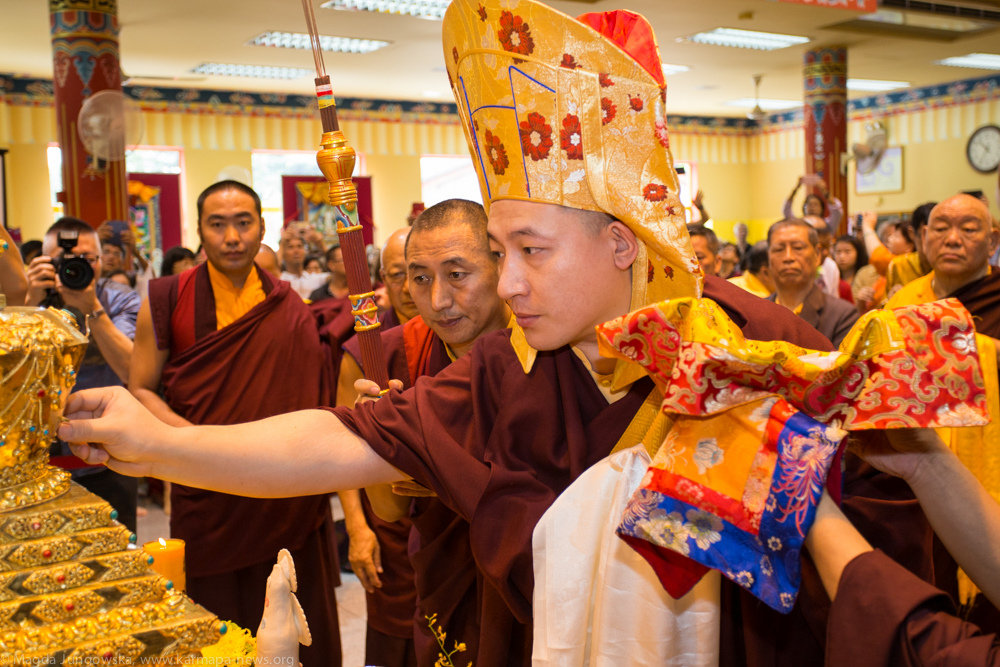 Gyalwa Karmapa installing the relics of Shamar Rinpoche into a Stupa

In the evening Gyalwa Karmapa gave an inspiring Dharma teaching about Bodhicitta. The night ended with taking refuge and the renewing of Bodhisattva vows.

In the morning HH Karmapa and the monks performed the Mahakala Puja. The Karmapa then conducted a Mahakala Empowerment for over 1000 practitioners involving extensive teachings and explanations for the ceremony. 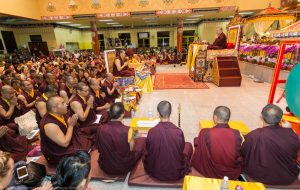 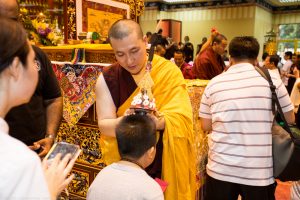 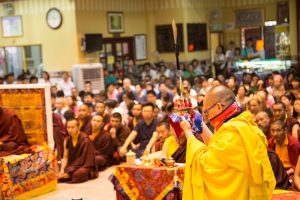 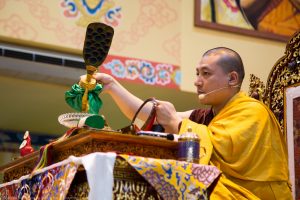 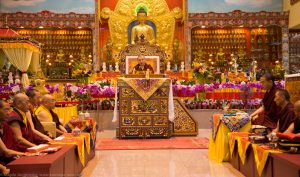 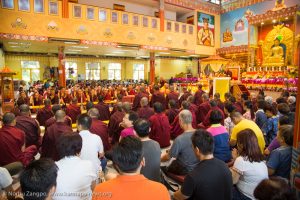 The Sangha members started the preparations, for what was to be, the first Kagyu Monlam to be held in Malaysia. His Holiness the Karmapa spent the morning giving private audiences starting with Chokling Rinpoche and various other venerable visitors. The Karmapa then spent the afternoon in a meeting with his Karma Kagyu centers from Malaysia and Singapore.