No less than two major Buddhist events took place simultaneously in Bodhgaya in the beginning of December: the Kagyu Monlam under the direction of the Gyalwa Karmapa Thaye Dorje and the recitation of the Pali Canon by monks from the Theravada tradition. 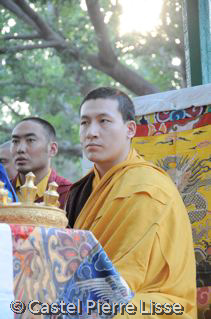 The space under the Bodhi tree was overcrowded with the 2500 Buddhist monks of the Karma Kagyu school of Tibetan Buddhism that had come together at this sacred Buddhist place. Many had taken upon themselves the arduous bus travel of 30 hours and more from Kathmandu or Sikkim. All of them were provided with meals during the Kagyu Monlam in the monastery of Beru Khyentse Rinpoche. The Mahabodhi Temple, the statue of Green Tara and the main shrine were decorated with countless beautiful tormas, flower garlands and other offerings. The air was filled with the peaceful recitations of the monks, that were led by the Gyalwa Karmapa Thaye Dorje and Kunzig Shamar Rinpoche.

Close by, also a large number of Theravada monks had already gathered. They had arrived in great numbers from countries like Burma, Laos, Vietnam and Thailand, where the Theravada tradition is flourishing. In Buddhism, monks are generally considered seniors according to their years of ordinations, in particularly in the Theravada tradition. Monks who upheld their vows for a long period of time are therefore highly respected and some of the participating monks were renown for keeping their vows for more than fifty years. Simultaneously with the Kagyu Monlam, they recited the entire Pali Canon, which took about ten days. The air was filled with the prayers of the Buddhist monks and practitioners of both traditions, which added further to the special atmosphere of this place. Visitors of the site had the rare opportunity to participate in either of the recitations and/or listen to both.

The small temples around the Mahabodhi Temple and the entrance gate were plentifully decorated with flowers and draped with enormous golden and silver cloths by the Theravada community. Thus, Bodhgaya was radiating and shining with the decoration of both , the Theravadin and Kagyu offerings, which fully complemented each other, expressing the deep estimation that Buddhist practitioners of all traditions experience at this sacred site.

During two of the afternoons – certainly a highlight of the Kagyu Monlam – the Gyalwa Karmapa gave inspiring teachings on The King of Aspiration Prayers for the Perfect Conduct, a short prayer that was taught by the Buddha in the Avatamsaka Sutra. During the other three afternoons, enormous Ganacakra rituals were peacefully celebrated. On one of the afternoons, the young Chime Tulku was officially recognized as the reincarnation of an important Buddhist master in a ceremonial celebration at Beru Khyentse Rinpoche’s monastery.

The Kagyu Monlam ended peacefully and the beginning for the next Kagyu Monlam was announced for the 27th November of 2009.