His Holiness, the 17th Karmapa Thaye Dorje in France April 2016

Following the memorial ceremony, His Holiness, Gyalwa Karmapa travelled to Dhagpo Kundreul Ling Buddhist monastery in the Auvergne region of central France. The purpose of his visit was to prepare students for a three year retreat which was planned to start the following month. The start date of the retreat was the 21st May and it was no coincidence that in 2016 this day was also Vesak Day. This very special and auspicious day is the most important day in the calendar for Buddhists, as it is when Buddha Shakyamuni was born, became enlightened and passed into Parinirvana.

Before the students start the retreat, they needed to receive empowerments from the Karmapa. The empowerments are transmissions and instructions for the practice and need to be given by a qualified master. There are blessings given within the ceremony and the students need to take particular vows related to the practice.

The empowerments were private, and exclusively for the students that were going into retreat. However, there was an unexpected announcement made, that following the end of the empowerments, the Karmapa would give public teachings. The news travelled quickly and despite the short notice, more than a thousand people turned up for an empowerment generously offered by His Holiness. It was not only the local sangha attended, there
were even some that had travelled from other countries. The Empowerment was of Buddha Amitayus (Buddha of Limitless Life) who is a Buddha aspect associated with the meditation for long life.

After the ceremony, blessings were given to those in attendance and then proceedings were then complete. 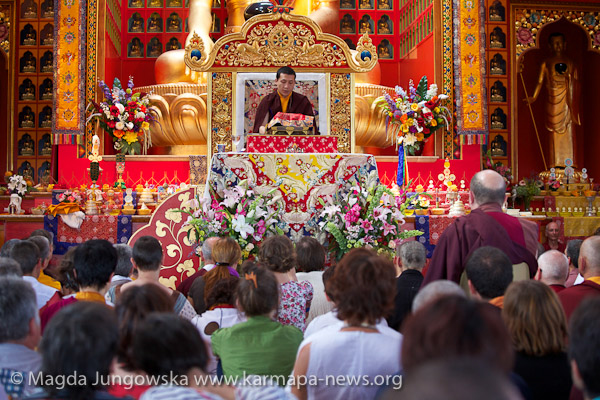